Inside a serene Carton House for fierce Lions training 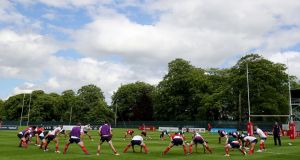 General view of the warm up before training. Photo: Dan Sheridan/Inpho

The mood at the British and Irish Lions stately training base in Maynooth, County Kildare was neatly reflected by the two dozen swans on the lake beside the endless winding drive leading up to Carton House. Serene on the surface but paddling frantically underneath to keep up will be the Lions default setting for the next few weeks, particularly in the wake of the gloomy news about Billy Vunipola’s tour-ending shoulder injury.

No man, as we all know, is bigger than his team, particularly when he has not yet worn its jersey. But Billy V? Not the Saracen tank who has been steamrollering all comers, until the weekend at any rate. Not now. What a massive hole his absence leaves in Warren Gatland’s planning.

It was impossible, consequently, to ignore the elephant-sized issue in the room as the head coach held court beneath the chandeliers. Perhaps the only other player whose exit would cause a comparable groan is Owen Farrell, presently a prime candidate for both the 10 and 12 jerseys. Gatland did his best to look on the bright side, grateful to have as many as 30 players in Ireland courtesy of last weekend’s defeats of Saracens and Leinster.

Only four individuals – Jonathan Sexton, Sean O’Brien, Rhys Webb and Ken Owens – were restricted to static bikes while the rest of their team-mates embarked on what will be a crucial week of training. In less than a week from now the squad will be on the plane to New Zealand; there is general acknowledgment they could do with another fortnight’s preparation time at least.

Gatland knows this better than anyone but it is too late now to do much about it. All the conditioning staff could do was drag the other bruised Saracens off to the cryotherapy chamber in an attempt to fast-track their recoveries. “We’re trying to cover an eight-week pre-season in about two weeks so having players we didn’t expect to have is a huge bonus for us,” said the head coach. Everyone’s spirits are willing; hopefully their bodies will eventually follow.

Sadly, though, the Vunipola setback also recalls the premature injuries which undermined the Lions last expedition to New Zealand in 2005; to Lawrence Dallaglio against the Bay of Plenty in Rotorua and Brian O’Driscoll in the first Test in Christchurch. Psychologically the ripple effect was significant in both cases, even if the outcome of the series would almost certainly have remained the same.

The only positive is that at least Vunipola’s exit has taken place before the squad have flown out. It tends to be harder to stay coolly philosophical when you are in a small New Zealand town, the rain sluicing down outside, when you have just lost to a local provincial team and one of your key Test totems is sitting head bowed and distraught in the lobby. The big No8 has been spared the never-ending flight home too.

And as one door closes, another one opens. Anyone who watched Vunipola’s cousin Taulupe Faletau in Bath’s last few games of the season will be aware the Welsh No8 is running back into some form at the right time. CJ Stander and Ross Moriarty will not take a backward step and Haskell will come stampeding out of every dressing room determined to prove he should have been on the tour in the first place.

The mind also slides back to Rob Howley’s horribly painful shoulder injury in 1997 and the series-turning opportunity that suddenly knocked for Matt Dawson. On the last tour the Lions ended up winning the series with a different captain – Alun Wyn Jones – and a replacement prop – Alex Corbisiero – leading the way. Not all unforeseen events are unfortunate.

Injuries, too, are simply part of rugby: an occupational hazard at all levels. At what point, though, does the attrition rate start to outweigh the attractiveness of the product? The Rugby Players’ Association chose a timely day to announce its membership’s rejection of Premiership Rugby’s plans to extend the domestic season until the end of June; at some point those shaping the sport’s future need to accept player welfare is more than just a couple of glib words to be routinely lobbed into every press release.

The counter argument is that professional rugby union as we know it will be financially unsustainable if the volume of games is reduced. But what price a modern, forward-thinking sport whose principal gladiators are injured before they even step into the ring and are torn between two or three increasingly demanding masters? Corbisiero should be in his prime and running around the green and pleasant acres of County Kildare; instead he is now promoting the game to an American television audience. Maybe, in the long run, that is good news for rugby. Right now, for all the beautiful serenity of the Carton House estate, the 2017 Lions need all the help they can get.