Lions Tour: Leinster and Saracens defeats to help cause 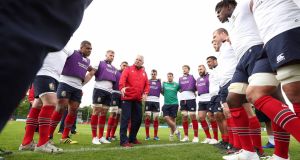 The reverberations from Leinster’s defeat to the Scarlets in last Friday night’s Pro12 semi-final at the RDS were still being felt in Carton House yesterday when the Lions assembled for their second of two four-day training camps prior to their departure for New Zealand next Monday.

However that result, like Saracens’ defeat to Exeter, was something of a bonus for Warren Gatland and his coaching staff.

Despite three of Leinster’s five-strong Lions contingent suffering knocks of various kinds, in addition to Sean O’Brien being ruled out of the game, all were in attendance at the Carton House yesterday and were of no concern to the Lions head coach.

Like Ken Owens, Rhys Webb and Jared Payne, Johnny Sexton and O’Brien took no part in training, although Gatland said this was due to them managing their workloads.

As an aside, Gatland raised an eyebrow or two when revealing that Sexton underwent an HIA after Leinster’s semi-final defeat, albeit that it revealed nothing untoward.

Gatland confirmed that Jack McGrath will be fit to travel next Monday after a scan on the arm issue which forced his early departure against the Scarlets revealed nothing more than bruising.

“He’s fine,” said Gatland of the Irish loose-head prop. “He had an x-ray, and it’s clear it’s just some bruising.”

McGrath was one of a five-strong Leinster contingent in the Lions’ squad who were thus, a little unexpectedly, available to take part in this week’s get-together, with Gatland also confirming that a “frustrated” O’Brien expects to be 100 per centt after “overloading” his work in training last week. Tadhg Furlong (leg strain) trained, as did Robbie Henshaw.

Having the Leinster quintet, along with the five-strong Saracens contingent after their last-ditch semi-final defeat to Exeter on Saturday, ensured a much more numerous presence this week than expected.

By way of contrast, they had 14 players in camp at the Vale of Glamorgan last weekend, whereas they have 30 this week.

“We’ve gone from having no ‘10’s last week to having all three ‘10’s this week, so that’s such a pivotal position and having those guys here as decision makers and leaders is quite significant and important.

To have Johnny [Sexton], Dan [Biggar]and Owen [Farrell] here this week, hopefully it’s going to help us be up to speed a little quicker than we expected. We may have had one after the weekend but to have three of them is a big bonus.”

Admittedly, this silver lining couldn’t entirely mask the dark cloud which accompanied the news that Billy Vunipola, one of the players assuredly earmarked to take the game to the All Blacks come the Test series, is being ruled out.

James Haskell’s ensuing call-up was due to his versatility across the backrow and experience of both touring New Zealand and playing there with the Highlanders, and with Toby Faletau, Ross Moriarty and CJ Stander as options at number eight.

“He gives us both options,” said Gatland of Stander. “I think he likes playing number eight and we know he can play six as well. So we’ll probably look at him at that position [eight] to start the tour and knowing we’ve got the flexibility to play him at six as well. With a few other players we can move that backrow around and look at combinations.

“It’s a nice position to be in because we’ve got that flexibility so people aren’t just pigeonholed into being a six, seven or eight. They can cover different roles for us.”

Adding to the scale of the task facing Gatland and co ., instead of provincial opposition, the Lions will play New Zealand’s five Super Rugby franchises, who are mostly cutting a swathe through their rivals.

“They are obviously playing very well,” said Gatland. “There’s some outstanding rugby being played by the New Zealand teams in the way that they are dominating the competition. We know how difficult they will be as opposition.”

Regarding any obvious trends, he added: “A lot of those teams are going through transition in terms of the way they are defending. Teams are coming up particularly hard off the line. So we are just watching that pretty closely in terms of that transition at the moment, the way New Zealand sides have traditionally defended, there’s a bit of a change in the way that they are doing that but there is no doubt but that they are playing some outstanding rugby and they are going to be tough prospects for us leading into the Test matches.”

In any event, having to refocus on all things Lions was also a blessing for the quintet in attendance in Maynooth, as Henshaw admitted, albeit the Scarlets defeat wouldn’t go away.

“I suppose we had a slow start and we did well to get back, to get ahead, after they scored but then we leaked two tries before the second half,” reflected Henshaw. “A few defensive system errors let us down, we failed to capitalise on their red card as well.

“It’s just really frustrating, little errors that wouldn’t be like us. We coughed the ball up way too easily in the first half. The amount of ball-handling errors was uncharacteristic of us. There were a lot of ‘learnings’ to take from it.”