Gordon D’Arcy: No steeper rugby incline than a Lions tour 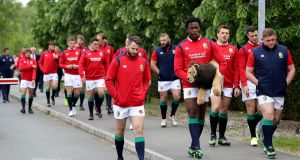 History shows us that a Lions tour wastes no time taking an irreparable turn for the worst. This unique squad can only perform if the sum of its parts delivers at precise moments, but can you back yourself to be picked by doing the basics perfectly or does eagerness to impress cloud your judgement in execution?

That’s a conundrum in itself.

With players getting no more than three games before the first Test, it can feel like those under-16 trials we all went through. The coach might not know you, just of you, so he tells all of us: “Play your natural game and have faith that will be enough to get you selected in the team.”

The Lions is the same. You’re 15-years-old again, surrounded by similar pedigree, and the clock is ticking.

This means you might slip into the trap of overanalysing everything before getting on the field, and when you’re out there as well; “there’s a gap, should I go for it or put my 13 away? Should I brace for contact and seek to offload, as I know I can, or hit the deck for a quick recycle?”

Normally, a player of international calibre wouldn’t think twice, but the need to impress can supersede normal behaviour. There’s a desire to instantly reproduce the form which got you selected in the first place. Form you produced during the Six Nations, but it’s now June and you’re coming off a ridiculously demanding club campaign.

The Lions is an unusual form of pressure that some players won’t have experienced in their career until now. All this, and more, consumes the mind on what can be a frantic tour. Still, it’s important to remain calm and retain your confidence so your natural game appears.

But, at the same time, you can be asked, depending on team strategy, to make subtle alternations in how you distribute or carry possession. So, your natural game may have to adjust.

A Lions tour is not the same as mentally preparing for a Champions Cup final, or Ireland against England in Dublin. It’s another level. It’s a separate entity, the rarefied atmosphere that requires nothing short of brilliance, within an alien structure and game plan.

That said, the 41 elite players have been selected because Warren Gatland believes they can cope with the extra strain. Introducing an intricate strike play will not be an issue for this group. An attack can falter, even at international level, because a team may lack a skill set in a particular position. Not here. Every player on a Lions tour is picked because the coaches see him as the best player from four countries in his position.

Keeping it simple, doing “nothing special,” is not part of the vocabulary anymore. Ireland laid that out in Chicago. Simply going around the corner won’t cut it against this opposition. There must be a heavy emphasis on creativity.

Finding the balance required to trouble the All Blacks in New Zealand demands that selection can only be based on form (the best man for the job, as seen on tour, gets the jersey). Selection based on reputation, or even recent form, could lead to a very long, punishing experience across the two islands.

There will be great times – every rugby tour, even the disastrous ones, have them – but when the tough moments arrive, starting with Tana Umaga’s Blues at Eden Park on June 7th, when the fabric of the collective will be properly tested, that’s when we will get a true indication of how these seven weeks will pan out.

I have written before about the need for emotive performances and how they can prove unsustainable, but this is a unique tour, where normal rules don’t apply and the Lions can feed off the energy of each performance. Given the incomparable Test preparations, the All Blacks should always beat the British and Irish Lions. So, under the most intense pressure imaginable these tourists have to be willing to do whatever it takes. They have to stand firm alongside men who, in many cases, they only met last Monday.

That gathering in London was an important few hours. They need not be in-sync by tea time but the smattering of hugs between rivals, reacquainted in some cases for the first time since the successful 2013 tour, means the first of many battles has been won.

The challenge of a Lions tour – and there’s no steeper incline in rugby, not even the winning of a World Cup – has become immeasurably harder. That’s a scheduling issue with the June 3rd launch pad hindered by the Pro12 and Premiership finals on May 27th.

That remains a significant handicap which we could be writing about in July. It comes around every four years, it’s a huge boon to the game and deserves a better slot in the incoming global calendar.

But I still believe there’s a really positive vibe surrounding this group.

What are the basic challenges? Club and country bias and styles have to be shelved on day one, so as to be receptive to new formats, because from last Monday morning the group already found themselves on a countdown clock that runs out on June 24th.

There’s also the small matter of every player needing to retain or regain form in order to make the Test XV. Then, come the second Test, it’s about finding another level of performance to cope with the All Blacks either in the venomous form Ireland encountered in Dublin last November, or an equally intimidating proposition of stopping their hunt for the series clincher.

Either way, it’s by some distance the most difficult task any rugby side can ever face. I’m speaking from first-hand experience but I’ve no interest in comparing the 2005 experience with what lies ahead. They are worlds apart. It remains painfully obvious what was done wrong 12 years ago.

I will say that I don’t envisage another segregated tour. Despite the numerical similarities to 2005 (41 players now and 45 then), Warren Gatland has stated the tour will not split into two squads.

That’s important. Isolate any rugby player, make him feel less important to those he trains alongside and the whole show will unravel in a slow, ugly and eventually uncontrollable scene.

There are, of course, lessons from the past. Alun-Wyn Jones and Leigh Halfpenny are the only survivors from 2009 in South Africa, so all the other returning Lions only know the victorious Test series in Australia.

I was called out in 2009 after a week as Riki Flutey and Keith Earls picked up knocks. Both had recovered by the time I arrived so I knuckled down to help others prepare for the Test series.

The potential for a hangover from ’05 was real but it didn’t linger. What cost us that series was a poor start in the first Test. Trailing the Springboks 26-7 after 50 minutes in Durban would be a no way back scenario if it reoccurred in Auckland next month.

Now, there is a notional team – or at the very least partnerships floating around Gatland’s head. Everyone knows certain players, if fit, will play. The rest will get an opportunity to climb up the food chain. Some will alter the coaches’ pre-tour thinking against the Blues, Crusaders or Highlanders.

But forget the games for now. Any successful rugby team is built upon a concrete foundation. A culture. The six Saracens men can bring that mental resilience forged over the past three or four seasons to the group. George Kruis and Maro Itoje are the sort of men who can help the modern Lions reach new heights.

Itoje, in particular, can not only be a key influencer but someone who will embrace what it means to be a Lion. Same goes for Tadhg Furlong. Tougher the challenge, the more Tadhg and Itoje are visible on the front lines. Tadhg doesn’t know it yet, but he will embody everything a Lion needs to be about.

Peter O’Mahony and Seanie O’Brien bring similar traits. I could go on but these are the type of players who immediately bring the essential spirit needed to turn a group into a team.

A team is when a healthy environment is created, whereby everyone feels they are actively involved. We hear it all the time but on a Lions tour, especially, those not playing on the Saturday set the tone for the squad’s overall success.

The non-selected must ask and answer that question correctly for the Lions to have any chance in New Zealand. Because if winning a Lions series is the most difficult task in rugby then winning a Test match in New Zealand is the second hardest. Winning a Test match at Eden Park – of which there are two this summer – hasn’t been done since the French beat the All Blacks 23-20 in 1994.

There are so many pitfalls touring New Zealand, but if everyone in the squad feels like an equal then most don’t need to avoided, they can be met head on.

I’m enthused by a number of factors. The age profile will stand to them and there isn’t an obvious weakness in any one position should the favourite to wear each jersey get injured (New Zealand can’t say the same right now as concerns remain over the fitness of Kieran Read, Jerome Kaino and Dane Coles).

Plenty of leaders are going on tour. Johnny Sexton and Owen Farrell are two more valuable lieutenants for Sam Warburton. These are players who always put the team above themselves. Sexton and Farrell have become better players year-on-year since 2013, which is important as huge improvements are needed when looking back at how the Lions overcame a poor Wallabies side. Also, plenty of these players know how Warren Gatland, Rob Howley and Andy Farrell run a team.

But history shows us a Lions tour can go either way. If modern young pros like Furlong and Itoje sacrifice their bodies and embrace the Lions spirit the seemingly impossible can be achieved.

Even if they revert to tearing lumps out of each other for another 10 years, they will a have a bond that lasts the rest of their lives.