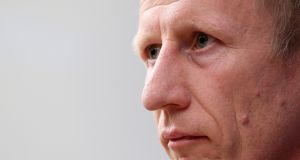 Leinster head coach Leo Cullen is remaining optimistic ahead of his side’s clash against a very affluent and physical Montpellier side. Photograph: Tommy Dickson/Inpho

Bracing themselves for the financial and physical monster that billionaire owner Mohed Altrad and new coach Vern Cotter have assembled at Montpellier, Leinster can only hope that Saturday’s 23-17 win over Munster will have fast-tracked their readiness for next Saturday’s European Champions Cup opener.

Leo Cullen expects to have Sean O’Brien back next week and possibly Isa Nacewa. The latter scored two tries in the corresponding fixture a year ago this weekend but missed a Leinster-Munster match for the first time since 2008, and a Leinster match at the Aviva for the first time ever, through injury. Leinster could do with them. While their backrow options are endless, O’Brien is world-class, and Nacewa would provide some additional leadership as well as big plays in a relatively callow backline.

Montpellier had won six of their first seven games to lead the Top 14 before suffering their second successive away defeat on Saturday when losing 31-20 away to Stade Francais. They did rest Wallabies fullback Jesse Mogg, the prolific Fijian monster Nemani Nadolo, the expensively acquired All Blacks outhalf Aaron Cruden, Georgian tighthead Davit Kubriashvili and flanker Yacouba Camara. Yet some rotation is normal with such a massive squad, and plenty of their frontliners, featured in a strong selection.

It’s still a daunting prospect, albeit it won’t be the first or last time Leinster will be punching above their financial weight, as Cullen noted.

“You look back at the way the game has gone and you think jeepers in 2012 we won the European Cup against Ulster in the final and you think of the teams that we played against en route there,” said Cullen after Saturday’s win.

“Then Toulon come along and the model that they have, from winning the second division and the players they had then – Victor Matfield, George Gregan – then they have the Jonny Wilkinsons etc, etc and the list goes on and on.”

“We have our way of doing things, and that’s a sustainable model that we have. We can’t control what other teams do, because we can’t accumulate 50 million quid of losses. That’s not the way it works. I think Saracens have this thing called making memories, but it’s making memories and racking up a huge debt at the same time.”

“So that’s a challenge, but that’s the teams we’re up against. Montpellier are the new team on the block. If you think back to the Leicesters and the Northamptons, and Toulouse, they’re where they are in the game. We want to be challenging at the top. We’ve a great opportunity this year to start off again. We got to a semi-final last year, almost getting there [the final] but we weren’t good enough last year, so we need to be better this year, and that’s all that we will be focusing on, is getting better, getting better, getting better.”

“Montpellier, I am sure, have been focusing on the same thing, because they went out and spent a lot of money during the summer to try and get better.

“You see the kind of threats they have next week, with [Nemani] Nadolo or [Timoci] Nagusa on the other wing, or Benjamim Fall, or [Francois] Steyn, or [Joe] Tomane or [Aaron] Cruden or [Ruan] Pienaar. The list goes on and on.

“There’s going to be so many threats that we have to be awake for, and we can’t cough up the ball as cheaply as we did today,” Cullen said as he reflected on the two turnover seven-pointers Leinster conceded to Munster.

Cullen reckoned there was “more stability” than at this point a year ago when Stuart Lancaster had replaced Kurt McQuilkin after the season had started, while for his part, Rassie Erasmus also believed Munster were in better shape than at the comparative stage a year ago when they had gone into Europe off the back of a 25-14 defeat to Leinster.

Describing that defeat as a hammering, Erasmus said: “It was much more comprehensive than today. I mean, last year we couldn’t score tries and in this game we scored three tries, and our discipline was bad. Last year from that we went on and made the semi-final, so we’re pretty much in the same boat.

“We’re playing Castres and we’ve watched them a little bit but we scored tries to still be second in our conference, there are many positives and Simon [Zebo] will be available, so yeah we’re not sitting too bad.”

Regarding Zebo, who has an abrasion on his knee, Erasmus said: “If Simon can train three days a week then he’ll be available next week. There’s always been a little niggle over the past two or three weeks. He’s basically the only guy who hasn’t got good game time this year. We’re into Europe now and we’ll have to see. It is a knee [injury] but not like knee trauma it was more like an infection on the skin. It wasn’t something serious.”

As for South African lock Jean Kleyn, Erasmus said: “There’s a chance he’ll be back.”