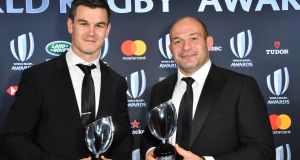 World Rugby Player of the Year Johnny Sexton and Ireland captain Rory Best, with the Team of the Year award, at the World Rugby Awards at the Monte-Carlo Sporting Club in Monaco. Photograph: Yann Coatsaliou/AFP/Getty Images

It dragged on interminably, like some of these more self-indulgent award ceremonies can do. Of course, the more preening and opulent, the more boring they tend to be.

Yet the unlikely setting of Monte Carlo, and according to World Rugby’s statement “in the presence of His Serene Highness Prince Albert II of Monaco” no less, provided the backdrop to something of the ultimate crowning glory for Irish rugby.

Johnny Sexton made off into the night with the equivalent of the best actor Oscar, ie the most prestigious award of them all, the Men’s 15s Player of the Year. Thoroughly deserved it was too.

Not many outhalves – well, none really – can score four tries in a competitive Test match as Beauden Barrett, shortlisted to win the award for the third year running, did against Australia in Eden Park. But Sexton was the most influential player of 2018. End of.

To put this in context, however, Sexton also ended a six-year All Blacks stranglehold on the award, and became the first Irishman to win it since Keith Wood in its inaugural year of 2001.

Ireland also won Team of the Year for the first time ever, and to put this further into context became the first Northern Hemisphere recipient since England in 2003. And by any yardstick, this has been the greatest year in the history of Irish rugby.

They won 11 out of 12 Tests, securing the Grand Slam for only the third time in history, a first series win in Australia for 39 years and beat New Zealand for the first time on Irish soil in 114 years. Hence, an all-time year end high of number two in the world rankings.

Orchestrating it all was Joe Schmidt. Yet, typically of the man, he was not there in person to accept his award as the Coach of the Year, so becoming the second Ireland coach to claim this accolade after Declan Kidney in 2009.

It was also entirely fitting, in this year of all years, that Leinster won a historic double of European Champions Cup and Guinness Pro14, for the province has been at the heart of the Irish success story.

It was also Leinster who head-hunted Schmidt to succeed Michael Cheika, with a little help from Isa Nacewa, back in 2010. To Cheika’s credit, he had given Leinster a year’s notice, thus giving CEO Mick Dawson, manager Guy Easterby and their Professional Game Board, chaired by Des Lamont, ample time to identify a replacement.

They scoured the Top 14 and Premiership, and it was Nacewa who strongly recommended Schmidt, then the Clermont assistant coach. Nacewa had played for Schmidt when the latter was backs’ coach at the Blues, and described him as “Mr Rugby”, admitting that Schmidt had taught him everything he knew about back play.

Dawson and co had sounded out the Leinster players, and rather than a high profile type, ala Jake White, they wanted a less heralded but innovative coach akin to Cheika. And akin to Cheika, Schmidt was a gamble, and relatively little known. He knew more about Leinster than they about him, and Dawson has joked that when they flew him over for an interview, it was more a case of him interviewing them. Sounds plausible.

But he’d prove an inspired choice, maximising what admittedly has been an unprecedented production line of talent through the schools/clubs/academy system, and mostly in Leinster. To be a great coach, first and foremost he needs great players.

Two Heineken Cups, a Challenge Cup and a Pro12 in three seasons with Leinster have been followed by three Six Nations titles, including a Grand Slam, in five, a first win anywhere and a first at home against the All Blacks, a first win away to South Africa and a series win in Australia.

Not everyone was a believer.

And that was in May 2016, after back-to-back Six Nations titles and four trophies in the previous three years!

As Shane Horgan said yesterday, Schmidt has left an indelible mark on Irish rugby, and on almost everybody he has come across in the last nine seasons. His attention to detail is obsessive. As Andrew Conway said on Saturday, the degree to which Schmidt drives standards is ridiculous, and we only know the half of it.

Not only that, but he identifies and nurtures talent, he develops an exacting system of playing which nonetheless ensures squad members seamlessly fit in, even at the last moment. He identifies opposition weaknesses and invariably gets his selections right. Almost every game has to have a Schmidt factor, more than any other coach around.

Pretty much all of them, Brian O’Driscoll, Johnny Sexton, Seán O’Brien et al, simply say he’s the best coach they’ve ever worked with. Sure that alone will do. While speculation immediately linking him with the All Blacks job always seemed premature, there’s not a rugby coaching job in the world that he isn’t qualified to do.

No one could possibly begrudge Schmidt a well-earned rest, and if there’s any consolation in his leaving, it is that he won’t be coaching any other international side against Ireland; not any time soon anyway.

The other consolation is that the succession could not be any more seamless, with Andy Farrell assuming the role of head coach through to the 2023 World Cup.

Although his time as the England assistant coach came to a flawed end, Farrell has twice served as the Lions’ defence coach, and been an integral part of the Irish triumphs over the last three years. He’s a better coach now than ever, and is highly regarded by the players. He’s the stand-out, seamless choice.

The other consolation is that Schmidt can truly put his considerable mind to Ireland’s Six Nations defence and the World Cup. He ain’t finished yet.