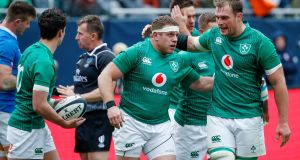 Ireland’s Sean Cronin celebrates with Rhys Ruddock, right, after scoring in their victory over Italy on Saturday in Chicago. Photograph: Kamil Krzaczynski/AP Photo

Time was when Ireland used to tango with Argentina on a fairly regular basis, so much so it prompted the former Ireland manager Brian O’Brien to liken it to a local derby. The rivalry has cooled over the years, but next Saturday’s meeting should be a good barometer of Ireland 2.0 under Joe Schmidt as well as Los Pumas under the more recently installed Mario Ledesma.

It is only the second clash since the 2015 quarter-final, when Argentina underlined their status as Ireland’s World Cup nemesis by ending their interest in the tournament for a third time with that stunning 43-20 win.

As utterly deflating and disappointing as yet another quarter-final defeat was, the main flip side is that it became the catalyst for Ireland 2.0 under Schmidt. Denied Paul O’Connell, Johnny Sexton, Sean O’Brien, Peter O’Mahony and Jared Payne that day in Cardiff, the defeat made him utterly determined to ensure Ireland would have more strength in depth for the 2019 World Cup.

Along the way, this hasn’t prevented Ireland from winning a Grand Slam and claiming some notable scalps against all of the the Rugby Championship quartet – the mighty All Blacks included. But it’s also fair to say that Ireland have more options than at the comparative point in the last World Cup cycle.

Plenty have been tried and tested along the way too.

It increasingly looks both a more difficult squad, and team, to penetrate than it was at this point four years ago

To a degree, of course, like any coaches Schmidt and his assistants have had their hands forced in this increasingly attritional sport. Chris Henry, who started that quarter-final against Argentina, yesterday became the 10th player from the 2015 World Cup squad to announce his retirement, following Richardt Strauss, Mike Ross, Nathan White, Paul O’Connell, Jamie Heaslip, Eoin Reddan, Jared Payne, Luke Fitzgerald and Tommy Bowe. In addition Donnacha Ryan, Ian Madigan, Paddy Jackson and Simon Zebo have moved abroad and out of the selection net.

Yet it increasingly looks both a more difficult squad, and team, to penetrate than it was at this point four years ago. A player has to really stand out to break into it, a la Jordan Larmour or Tadhg Beirne.

Even though both were making their first Test starts and this was a second-string Italian side, both demonstrated they can bring something a little different – Larmour with his ability to beat his man, and a few more into the bargain, and Beirne, whose strong ball-carrying adds to his set-piece work, good hands, tackling and turnover skills. Hence, both are not only capable of breaking into the squad but the starting XV come the World Cup as well.

They threw down the biggest markers on the first Saturday of a month which looks like being hugely influential in nailing down places in the Six Nations squad and then the World Cup.

In Rory Best’s absence, Rob Herring and Niall Scannell had big tours to Australia, and on Saturday Sean Cronin again looked almost reborn. Two of these will not make the match-day squad against Argentina and then the All Blacks, while one will miss out on the World Cup.

If Schmidt again restricts himself to five backrowers, three of the eight in this squad will miss out on the World Cup

Compared with four years ago, Cian Healy, Jack McGrath and Tadhg Furlong are still there, but the latter was a relative baby then, with one cap before that tournament, whereas he’s world class now. Fast-tracking Andrew Porter into the squad has been rewarded and, furthermore, Dave Kilcoyne and Finlay Bealham backed up strong starts to the season off the bench in Chicago and are now putting real pressure on McGrath and John Ryan.

James Ryan’s emergence is such that it’s almost a case of who starts alongside him from Iain Henderson, Devin Toner and now Beirne – one of whom will miss out next Saturday and against the All Blacks.

If Schmidt again restricts himself to five backrowers, three of the eight in this squad will miss out on the World Cup, but the quality as well as the depth looks stronger than three years ago.

Less so scrumhalf, where Eoin Reddan was a wily, experienced back-up to Conor Murray, which is partly why the latter’s apparent absence this month can be a blessing in disguise. Similarly, as things stand, Joey Carbery and Ross Byrne are less tried and tested than Madigan and Jackson in 2015.

While the midfield looks stronger, with Robbie Henshaw, Garry Ringrose and Bundee Aki vying for two spots, the outside backs have been hardest hit by retirements and departures. Hence, there would be benefits from seeing more of Larmour and also Andrew Conway and Darren Sweetnam in this window.

As for Los Pumas, perhaps contrary to perception and in light of Ledesma being promoted to replace Daniel Hourcade, there has been a fair degree of continuity in their personnel. All told 17 of their 31-man World Cup squad, and 11 of their quarter-final match-day squad, are in the 38-man panel for a tour which also takes in games against France and Scotland.

Ledesma, as you’d expect, has improved their set-piece game, and the brilliant Pablo Matera, one of the standout players of the year, has assumed the captaincy from Agustin Creevy.

Leading Australia 31-7 at half-time in their final game, the Pumas looked set to register three wins out of six in the Rugby Championship for the first time.

While they don’t have the back three of Juan Imhoff, Joaquin Tuculet and Santiago Cordero that skinned Ireland in Cardiff three years ago, they retain the same inventive running game and have a new potent back three of Ramiro Moyano, Emiliano Boffelli and Bautista Delguy.

They also seem to be peaking toward the World Cup. It was ever thus.

Chelsea stand tall defensively to repel Sevilla and come away with a point 22:22
Champions League round-up: Juventus and Barcelona off to winning starts 22:11
Waterford’s Pauric Mahony out for the season 21:26
Hugo Keenan could start in changed Ireland team against Italy 21:04
Guardiola takes blame for City’s European failings 21:12
Crossword Get access to over 6,000 interactive crosswords