Gerry Thornley: Expect All Blacks to revive mood of dark intent from Dublin

Warren Gatland said the British and Irish Lions would not get carried away with levelling the test series against the All Blacks after just scraping a win over a side that played nearly three quarters of the match with 14 players. Video: Reuters 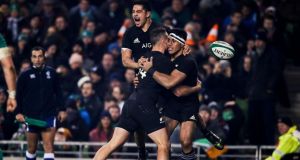 By this point a dozen years ago, the Lions tour was miserable. There was only a dead rubber to look forward to, and the Lions were way off the All Blacks’ pace. It was the longest week ever.

There was no detour to Queenstown. The tens of thousands of Lions fans trooped around Auckland. It rained every day. No, really, it did. The mood hadn’t been helped by the horrible way Brian O’Driscoll’s tour had been ended.

In the current climate, with recourse to TMOs, both Tana Umaga and Keven Mealamu would have been red-carded. Well, maybe if a strong referee like Jerome Garces was in charge. Perhaps not had Jaco Peyper been the referee, for one was left with the abiding impression that had he been in charge last Saturday, he was not of a mind to brandish a red card at Sonny Bill Williams. In any event, even the 2005 Lions might have beaten 13 men in the first Test.

But, compounded by Clive Woodward and Alastair Campbell orchestrating the ensuing PR campaign, save for, ironically, an editorial in the New Zealand Herald, New Zealand rugby and the All Blacks became even more indignant and defiant.

The mood turned a little toxic, even off the pitch. Talking to Irish fans who were part of the Lions’ supporters here 12 years ago, the mood this time has been altogether better. Maybe the comparatively friendlier weather has helped, but given the heated contests and heightened tension, they say it has been a different experience altogether.

Perhaps because of their experience from hosting the 2011 World Cup so efficiently, this rugby-mad nation is also essentially a very rugby-friendly country. The fans have mixed happily and raucously. The NZ Tourism Board and the NZRU have been outstandingly efficient and generous hosts. Their Irish counterparts could learn plenty.

The red card incurred by SBW last Saturday is not remotely comparable to Speargate. There has been virtually universal agreement that his shoulder into Anthony Watson’s head merited a red card. Nor has there been an outcry to Sean O’Brien being cleared after being cited.

This time we also have a series decider, and a momentous rugby match. Outside of a World Cup, it’s hard to conceive of a bigger one. So there’s plenty enough to be going on with.

For the first days of this week, the two squads have been going about their business in contrasting fashion. The Lions have been based in a hotel outside Queenstown, where there wouldn’t have been much chance of a respite given about a quarter of the Red Army have taken a break here as well.

Hence, if not lying low and having coffee time together or with family and friends, they have been able to take helicopters to the aptly named Remarkables and to Milford Sound, shotover jets and the Nomad Safari, which is a 4x4 tour around the area.

The All Blacks headed straight to Auckland for a full week’s preparations there. In their moment of defeat last Saturday, when Kieran Read spoke of already looking forward to the series decider, beneath the pierced smile you knew there was a bitter intent. As an aside, this will be his 100th cap, making him only the eighth All Black to reach the milestone.

After just his second defeat in 24 games as captain (and we know what happened after the first one) this is the biggest test of his leadership. These All Blacks will be even more motivated than they were in spitefully vengeful mode in Dublin.

A few days before the second Test, Johnny Sexton was asked if the Lions needed to replicate the same kind of mood which the All Blacks demonstrated when avenging their Chicago loss in Dublin a fortnight subsequently.

“I don’t think so because if we did that we’d get a couple of red cards,” he quipped. Or at least he said with a wry grin, before going on to say that the Lions’ need to win more confrontations and physical battles had to be married with discipline.

Yet coming into this third Test, there is, possibly, also a degree of vulnerability, or at any rate uncertainty, about the All Blacks. The frontrow, secondrow, backrow and, to a large extent, halfback combinations remain fairly settled. But beyond that, the All Blacks have lost Ben Smith, Ryan Crotty and now Sonny Bill Williams.

Last Saturday, the inexperienced Rieko Ioane was successfully targeted in the air, and the All Blacks’ policy of picking a specialist centre on the bench again resulted in Beauden Barrett being shifted to fullback. And superbly adaptable fullback though he is, any opposing team would prefer to see him back there than at the position where he became the World Player of the Year in 2016.

What’s more, the All Blacks opted to pick the uncapped Ngani Laumape on the bench, who on several occasions looked out of sync with his team-mates when the Sexton-Owen Farrell axis put width on the Lions’ game.

There remains an outside chance that Crotty, the Conrad Smith-type or glue that stitches the All Blacks’ backline together, may return but it’s unlikely and would be a gamble.

Despite rumoured to be bound for Toulon, SBW’s four-week suspension has led to Malakai Fekitoa finding a way back into the squad, and it could be that he will be restored at outside centre, with Anton Lienert-Brown shifting to “12”, which is the same partnership the All Blacks used in their revenge mission to Dublin. That was only their second time together, the last being the subsequent win in Paris a week later.

But re-uniting these two would be in keeping with reviving the All Blacks’ mood of dark intent in Dublin. Expect more of the same.