Gerry Thornley: Seán O’Brien had that rare quality of making others play better 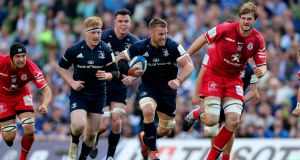 Leinster’s Seán O’Brien in action against Toulouse during the Heineken Champions Cup semi-final at the Aviva Stadium. An O’Brien tide lifted all boats. The best captain Ireland never had? Photograph: Inpho

Another one bites the dust, and, allowing for ongoing Sevens and under-20s commitments, this applies to both another domestic rugby season and, sadly, another of the all-time greats of Irish rugby.

Coming after the extraordinary, all-dominant, all-conquering 2017-18 seasons, the one just completed was always going to struggle to achieve those heights.

Nevertheless, lest we forget, Ireland did beat the All Blacks for the first time ever on home soil in completing a four-match Guinness Series clean sweep, so making it 18 wins out of 19.

Granted, the defeats by England and Wales bookended a disappointing Six Nations and left Ireland third, but they’ve still won 21 of their last 24 matches.

Three Irish teams reached the knock-out stages of the Heineken Champions Cup, two the semi-finals and one the final, albeit that saw Saracens wrench the trophy from Leinster.

Even so, after all four Irish provinces reached the knock-out stages of the Guinness Pro14 – thereby ensuring all will compete in next season’s Heineken Champions Cup – Leinster at least retained this title with last Saturday’s win over Glasgow at Celtic Park.

By any yardstick, that’s a decent season, especially when adding the Ireland Under-20s Grand Slam and the achievement of the men’s Sevens squad qualifying for the World Series for the first time.

Last Saturday’s win was not insignificant either in that both sides are bulk suppliers to Ireland and Scotland, who meet in the first competitive game of next season in their World Cup pool opener.

Alas, Ireland have already been dealt a significant blow in losing Seán O’Brien in addition to Dan Leavy. On his day O’Brien was almost unplayable. He could influence games almost through the force of his own will, whether through those explosive leg-pumping carries, breakdown turnovers, big hits or skill-set.

As mentally strong as he was physically, his endless list of operations would have broken lesser men. O’Brien’s voice, sheer presence and leadership skills are constantly referenced by teammates, and but for those injuries he’d assuredly have captained Ireland more than once; the 28-22 World Cup warm-up win over Scotland at the Aviva Stadium.

As much as anything, through his deeds on the field and his voice, he made others play better. That’s a rare quality. An O’Brien tide lifted all boats. The best captain Ireland never had?

According to one of his coaches, as much as being a world-class player he is a world-class bloke, and not the least of his attributes was his loyalty to Leinster and Ireland. Stade Francais and Toulon, to name but two, moved heaven and earth to lure him to the Top14 with more lucrative deals, but he stayed with his native province. And as a product of Tullow, he was a hugely important face of Leinster rugby.

When Leavy began to emerge on the scene, the thought occurred as to how effective that might have been together in the same backrow. Watch out world.

In November 2015, they played the last five minutes together of a 19-15 win over the Scarlets at the RDS when the then 21-year-old Leavy replaced Dominic Ryan. But it would be almost exactly two years before they line up alongside each other again, when starting together for the first time against Connacht at the RDS. Leavy was man of the match in a 24-13 win.

Alas, there would only be seven games all told in which they both started in the Leinster backrow. Needless to say, Leinster won them all.

There were alongside each other in a couple of thumping wins over Zebre that season, as well as the 32-17 Heineken Champions Cup quarter-final win over Wasps.

The following season they started together only once, at the Kingspan Stadium in October, in Leinster’s first victory in Belfast since May 2014 when O’Brien was captain and man of the match and Leinster became the first team to win away to Ulster in the Pro12 in a year.

This season they were twice more in harness, a 30-22 win over Munster at the Aviva and a 31-3 win away to Benetton, both in October. Leavy replaced O’Brien in the 53rd minute of the Heineken Cup quarter-final victory over Ulster, only to suffer his season ending knee injury within 11 minutes of his arrival.

Of course, they were competing against each other to some degree as well, but even so, it’s a regret they never played once together for Ireland. Leavy made his debut as a replacement for O’Brien against Canada in November 2016, and again the following March against England at home, while the most recent of his 11 caps was when replacing O’Brien for a third time after the latter suffered a broken arm against Argentina last November.

Now, they never will play together for Ireland, and when Joe Schmidt announces his preliminary World Cup training squad of 45-plus today, O’Brien and Leavy will be the two notable absentees. Ireland’s chances have been diminished, for at their best, O’Brien and Leavy brought another dimension, call it X-factor.

The wellbeing of Josh van der Flier, who himself has had two operations in the last 18 months, now looks more important than ever. Beyond him, only the versatile Jordi Murphy looks a proven, viable option as an openside, unless Schmidt digs deeper.

Discussing the options available to Leinster in light of O’Brien’s impending move to London Irish in the aftermath of last Saturday’s win, coach Stuart Lancaster mentioned Max Deegan, Caelan Doris and Scott Penny. “I think Scott Penny is a little Seán O’Brien, to be honest, he’s going to be a great player,” said Lancaster of the 19-year-old, one of the stars of the Ireland Under-20 Grand Slam, who scored two tries in six appearances for Leinster this season and has been swiftly promoted from the academy to their senior ranks next season.

Unfortunately, Penny has also been sidelined for the upcoming Under-20 World Cup which starts next Monday, and which rather sums up the attrition rate for modern-day backrowers.

1 Ireland v Scotland: Doris’ day as Caelan set for first cap
2 Six Nations: Pundits, journalists and players have their say
3 Gary Lineker: ‘60 is just a number, 70 is the one to worry about’
4 Ashleigh Barty now living up to all her earlier promise
5 John McEnroe slams Margaret Court as ‘crazy aunt’ of tennis
Real news has value SUBSCRIBE