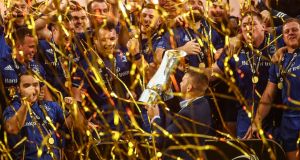 There was a little vignette at the start of the second half which, for a Leinster supporter, must have been reassuring.

Competing in their 20th final in the professional era, and their 19th since 2008-09, Leinster’s greater big-game experience began to shine through as they hunted their 11th trophy overall and 10th in the last 11 seasons.

Glasgow had seen their deserved early leads of 7-0 and 10-5 – which ought to really have been 14-5 if Adam Hastings had used the three-on-one on his outside and given Sam Johnson a flat pass for a run-in rather straight into contact – turned into a 15-10 interval deficit.

Two minutes into the second period, rather than use his huge boot as he had done three times in the first half, Stuart Hogg countered from inside his own 22 before being hauled down by Cian Healy and Scott Fardy. Two phases later Jonny Gray knocked on inside the Glasgow half, and after Leinster took Glasgow through several phases, Robbie Henshaw opted to find touch on the Warriors’ 22.

Leinster were in cup final mode, while Glasgow were, well, still being Warriors, and with 57 per cent possession in the second half Leinster enjoyed 73 per cent of the territory. When you know how to win and all that.

Helped by a superior scrum which earned them a key turnover through an indirect penalty and a subsequent three-pointer from 45m by Johnny Sexton, they had started to adapt to the sodden conditions in the second quarter.

Off another scrum, they went through 17 phases, which culminated in the outstanding Cian Healy barrelling through the tackles of Rob Harley and Callum Gibbins with a little help from the tireless Fardy.

They ought to really have put the game further out of sight when, leading 18-10, Sexton’s delicious grubber and the energy of Rob Kearney, Fardy, Garry Ringrose, James Ryan and Henshaw trapped Glasgow in their in-goal area.

As it was, Rob Kearney’s yellow card for clattering into an airborne Hogg and a superbly conceived try for Grant Stewart set up a one-score finish, but Leinster’s defence and then ball retention saw out the endgame deep in Warriors’s territory.

One of the advantages for the media in having Sexton as captain is his more regular appearances in front of us, and as ever he summed up the game perfectly.

“When the weather came in it was about who adapted the best. It wasn’t perfect, there were lots of things that we could have done better but one of the things we said after the Sarries game was ‘we don’t have to win every moment, we just have to win more than the opposition.’

“I thought that’s what we did today, we won a couple more moments than them. They’re an outstanding team and it is a pity the conditions came in, because we prepared all week to come in and give it a real rattle with ball-in-hand and they did as well. It would have been an even better spectacle.”

Glasgow possibly had the better attack, and both played with more width and made more passes (195 to Leinster’s 101). But Leinster kicked more, 33 to 21, and not only made more tackles but ramped up their line speed to telling effect.

“We did a lot of work on defence during the week,” admitted Stuart Lancaster. “If I’m being honest, that was the main focus. I’m delighted we got there in the end. Glasgow will be back and I still think they’ll be there or thereabouts next year.”

It was a testimony to Leinster’s mighty effort that in completing 205 tackles, 12 of their starting XV were in double figures; James Ryan and Rhys Ruddock leading the way with 28 and 27, while missing just one each. Henshaw and Fardy were immense in the middle too, making 18 tackles apiece.

James Lowe, used as a battering ram more through the middle than on the wing in that second half, described their defence in his own inimitable style.

“The way I describe it is that we’re too much Garry Ringrose, we’re too pretty. We need to be a bit more Robbie Henshaw because he’s not as pretty as Garry, so that’s how I word it anyway.”

In truth, no one did more to turn the tide, not least in defence, than Ringrose. In response to Glasgow’s opening try by Matt Fagerson from their own route one, multi-phase, Jordan Larmour (who has had less stellar moments this season but as his defensive work, chasing and aerial ability showed here, is now a more complete player) chased down Sexton’s hanging restart and tackled DTH van der Merwe well inside the 22.

A phase later, Luke McGrath was like a sprinter out of the blocks to charge down Hogg’s clearance and Ringrose bounced on the spinning ball for the try. Buoyed by that, Ringrose grew increasingly influential.

It was his line speed and tackle of Kyle Steyn well beyond the gain line which stymied a Glasgow attack and then, after Sexton got his boot to a loose pass, it was Ringrose who led the breakout and linked with Lowe, in turn leading to the penalty which saw Steyn binned and made it 18-10.

That, ultimately, sealed a win which may even be significant beyond this weekend.

“It keeps the Leinster momentum going,” said Sexton. “We’ve been to four finals in two seasons and won three. That’s a really good return. If you come away with two losses it looks completely different, you’re going into next season empty handed. It changes your summer holidays to an extent.”