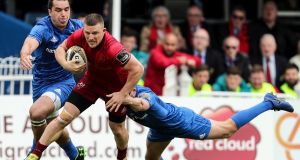 After five months of suspended animation, no team will be required to hit the ground running more than Munster. First up Leinster at the Aviva Stadium, where Munster have beaten their provincial rivals once in 11 visits since its refurbishment as well as losing a European semi-final and Pro14 final three seasons ago.

What’s more, of course, Leinster were unbeaten when the 2019-20 season was interrupted and have now won 21 games in succession since their Heineken Champions Cup final loss to Saracens in Newcastle in May last year.

There are easier seasonal openers or, strictly speaking in this case, re-opener.

“There are, absolutely there are,” agrees Andrew Conway who was speaking at an event held by Pinergy. “That’s a tough game. Any time you play Leinster, no matter what team Leinster put out, it’s a tough game for anyone in the world at this stage. But it’s exciting and we’ll be confident, because we have a good team now too. We’ve got a few great additions and hopefully we’ll get a few lads back who have been out for key moments and then we’ll see what happens on the day.

“But it is very exciting, and nervous at the same time,” Conway added, no doubt expressing the feelings of many players when rugby does return, for the normal concerns after an off-season are compounded by the length of this enforced break.

“Whenever you haven’t played for such a long period of time the mind is a funny thing, it can play tricks on you, but you’ve just got to embrace all these mad thoughts that go through your head and put the work in, and then once you’re there on the day you’ve done the work then. You can crack into it.”

Conway’s desire to beat his former province remains as strong as ever.

By Conway’s own admission, Munster had an “average” 2019-20 season. “We had some good wins and we had some good performances,” he added, of a campaign which, he also conceded, was defined by not reaching the knockout stages in Europe.

Yet Conway, more than most, must have rued the 2019-20 season being interrupted for he was in arguably the form of his life. Aside from his workrate, defensive reads, effectiveness in the air, his potent finishing had seen him score nine tries in 17 games for province and country.

Even so, if he can continue where he left off, he is well placed to complete an entire Six Nations campaign for the first time and, in the longer run, is not shy about his Lions ambitions - nor should he be.

The third Test in South Africa is not until August 7th 2021 making for, in effect, a 12-month season, although Conway believes the Irish system will be a help.

“We’re lucky in Ireland that we’re well looked after, that’s going to be a big part of it. I suppose if you’re going in with that mindset, that’s the wrong mindset, you’re setting yourself up for a fail in my opinion.

“You’re going in, I want to play as much as I can for Munster and for Ireland, it’s not my job to do the managing. I’m putting my faith in the coaches and strength and conditioning staff and medical staff and we’ve got great coaches and the other stuff within both Munster and Ireland, that’s where the trust comes in, we’re going to be given everything and we’re going to go for it when we need to and then at times we’re going to need to be held back, and given a small break if there has been a big block of rugby.

“They’ve done that really well in the past. It’s obviously going to be a small bit more challenging with what’s ahead, but I’ve got good faith in them.”

First though, his ambitions all start with Munster, and like everyone in the province he’s entitled to be more optimised about the crammed year ahead, with the arrival of four new singings including World Cup winners Damian de Allende and RG Snyman.

Furthermore, whereas last season a dozen of Munster’s front-liners missed a pre-season with the newly acquired coaches Stephen Larkham and Graham Rowntree, this time around Munster ought to be more cohesive from the outset.

“Yeah exactly, you would think so and it does feel different. We’re getting proper time with coaches and getting proper time to have conversations and go back and forth, and not just be thrown into something and say ‘yes or no sir’, or be coming from a different environment and things being done completely differently and it taking a while to adapt.

“So, it has to really and we can feel it training, and even the dialogue is easier to get through. There’s more of an understanding. They understand us more and we understand them more, and yea it’s exciting. It really is exciting.

“Obviously we say that the whole time but this feels like something a bit different. Now there’s plenty of work to do, and we’re under no illusions that that doesn’t guarantee us anything, the fact that there’s going to be a bit more cohesiveness, but there’s been a good few weeks put in and there’s been a good foundation set that I think that we can springboard with.”

With that has come heightened expectations, from within the squad as well as from their supporters.

“Yeah, that’s a fair comment I’d say. That’s accurate. It really just has shown, it’s probably highlighted that you were a bit ignorant the last year, in that you just think ‘okay, we’ll be out and then jump back in and we’ll able to do this’.

“You’re able to do it to a certain level and then you get found out by the Racings and the Sarries and the Leinsters. You get through some games but Steve is using his knowledge and pushing us and we’re challenging him. Well, he’s more challenging us than challenging him. He’s got a whole new thought process on things and he marries the skills with the mental applications of the game really well.

“We’re not going to be perfect straight away, don’t get me wrong, it would be unrealistic to think that but the foundation is going to be strong and then we need to start building from that.

“Obviously we need to build straight into a Leinster, then a Connacht, and then hopefully it will be knockout rugby straight away but I am excited.”