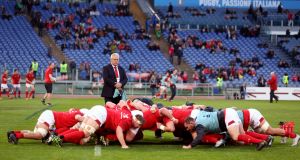 Warren Gatland and Eddie Jones – two major figures in world rugby – face an intriguing coaching battle on Saturday when Wales tackle England in what many see as a Six Nations title eliminator.

Experience: Gatland cut his Northern Hemisphere coaching teeth with Connacht – he went on to coach Ireland – before enjoying domestic and European successes with Wasps and then embarking on an 11-year stint as Wales boss, while also coaching the British and Irish Lions to Australia (2013) and New Zealand (2017).

Tactics: “Warrenball” has been used as a term to describe Wales’ big ball-carriers crashing into contact, with support runners then attacking various defensive channels off the back of it. Wales, though, are about so much more than that, with Gatland encouraging and developing his players to perform in a number of different ways.

Style: Gatland’s mantra is simple – hard work. Miracles and magic wands are not discussed in the New Zealander’s world, and he is constantly challenging his players and fellow coaches. He commands respect through his actions, and leads from the front.

System: The unavailability of England-based Wales players for Tests outside of World Rugby windows is something Gatland has had to live with, but an introduction of national dual contracts aimed at keeping players in Wales and seeing others return, such as centre Jonathan Davies, has proved an important development.

Six Nations results: Gatland set the tone from his first game in charge – the 2008 clash against England at Twickenham – when his team fought back from a half-time deficit to win and go on to land a Grand Slam. Another clean sweep followed four years later, with Wales successfully defending the Six Nations title under Gatland’s assistant Rob Howley in 2013 when the New Zealander was on Lions duty. Gatland has made Wales a consistent Six Nations force.

Experience: Jones has an extensive coaching portfolio, one that includes spells in Japan, England, Australia and South Africa. He led Australia to the 2003 World Cup final, when they were beaten by England, and masterminded the Wallabies’ 2001 Test series triumph against the British and Irish Lions. As Wallabies boss, he also oversaw a Tri-Nations title, while he won a Grand Slam in 2016 during his first season as England supremo.

Tactics: Approach has often been hit by injuries to key personnel like the Vunipola brothers, Mako and Billy, and Leicester centre Manu Tuilagi, but some of England’s rugby under Jones has been sensational. It has a power game through the forwards at its core, but he has also enhanced England’s attacking armoury and overseen the emergence of players such as Jonny May, Henry Slade and Elliot Daly.

Style: A smart man-manager whose ability to inspire players shone through when he transformed England’s 2015 World Cup flops into Grand Slam champions in only six months. He also likes a mind game or two with the opposition. Ahead of Saturday, he has already labelled Gatland’s Wales team “the greatest Welsh side ever” and claimed the Principality Stadium has “never been a fortress for me”.

System: Jones works amid a difficult landscape. Given more time to work with his squad than his England coaching predecessors, he has the largest playing pool to select from – but it is the clubs who control the players and pay their salaries, so inevitably they dictate their schedules.

Six Nations results: Oversaw a Grand Slam in his first year and the title in his second, Jones made a memorable start to Six Nations life, although things unravelled somewhat last season when England suffered three successive defeats and finished fifth – their worst performance for more than 30 years.