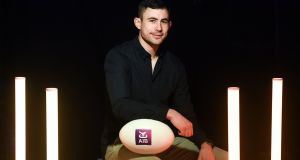 Felix Jones: “I’m still very keen to stay in the sport,” he said at the AIB Future Sparks festival launch, which takes place on March 26th in the RDS. “I’ve a number of options that I have to give due consideration to.” Photograph: Ramsey Cardy/Sportsfile

As Munster fade from the European picture, Johann van Graan will have learned plenty about Irish cultural norms. The usual stuff, like people complaining behind your back rather than to your face.

Presumably by now the 39-year-old has grown a thick outer layer. Coaching inside a disastrously unsuccessful Springbok camp under Allister Coetzee helped to prepare him for whatever comes his way in Limerick and beyond.

All the while Felix Jones was moving in the opposite direction. The breaking up of Van Graan’s first iteration of a Munster coaching team left the former Ireland fullback without a job late last year.

Rassie Erasmus, who Van Graan of course succeeded, came back around for Jones to create a new role in the South Africa management before the World Cup. The brief was analysing opposition after the player leadership initially rejected an official title of attack coach.

What happened next – capturing the Webb Ellis trophy in Yokohama – altered the careers of many and that appears to include the genial Dubliner. What Jones does next will be revealed soon enough.

“I’m still very keen to stay in the sport,” he said at the AIB Future Sparks festival launch, which is takes place on March 26th in the RDS. “I’ve a number of options that I have to give due consideration to.

The quality Van Graan’s Munster definitely need arrives next summer and Jones is well-placed to comment on the merits of RG Snyman and Damian De Allende. The lock and centre are Munster-bound when they finish their respective stints on the lucrative Japanese club scene.

Jones was very clear about stating there is more to these giant Springboks than raw power.

“I can 100 per cent vouch for De Allende’s character. He is absolutely world class in a number of areas – his skill set, his handling, his collision-winning, his breakdown, his decision-making, his ball-carrying. I think for a guy like Damian it is rare that he hasn’t been pigeon holed as a 12 or 13 and to do that he had to work very hard continuously on different parts of his game.

“He is good pals with Jaco Taute and they are cut from the same cloth; two of the hardest-working centres I have ever come across. Damian can slot in and make the guys around him look brilliant and I mean Lukhanyo Am at the World Cup.

“What people are going to get with Damian is a world class person and performer.”

Such a stamp of approval is high praise considering how little Jones reveals in media interactions. De Allende, he adds, has all the ingredients to do for Munster what Europe’s most lethal weapon Virimi Vakatawa keeps producing for Racing 92 and presumably France in the Six Nations.

“He is a big guy who can do a number of things at a world class level. The reason he will be successful at Munster, regardless of the game plan or players around him, is because he works unbelievably hard. That’s the difference in my opinion of the top, top guys; after a session they work on their footage and their extras. He is one of those guys.”

All Van Graan has to do is turn Munster’s current form around, perhaps silencing the whispers by winning the Pro 14 before the reinforcements land in Limerick.

“I can also 100 per cent vouch for Snyman,” said Jones. “This guy is a super person. Great craic. For a huge man he has unbelievable acceleration, really good offloading ability and will obviously bring a lot of mass.

“If you look at the teams that have got into the final of the European Cup over the last number of years – Leinster, Saracens and Racing are thrown in the mix there – generally they have upwards of eight currently starting international players on top of guys who are touching that bar, either breaking in or coming off the back of it [Test rugby].

“Munster have had four in Pete [O’Mahony], Keith [Earls], Conor [Murray] and CJ [Stander]. So these are two guys who will add to that for sure. They definitely will add to Munster and not just on their skill and playing ability but because they are incredibly hard workers.”

All the IRFU needs to do is formally confirm the signings.