Under 18s should not play rugby, says ‘concussion’ doctor 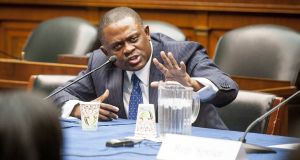 Forensic pathologist and neuropathologist Dr Bennet Omalu: “All it takes is one season, one concussion and your child’s brain is permanently damaged.” Photograph: Pete Marovich/Getty

Dr Bennet Omalu, the neuropathologist renowned for his work on chronic traumatic encephalopathy (CTE), the brain disease caused by concussion, has called for a global ban of contact sports at underage level.

“The fundamental problem here is the risk of exposure to repetitive blows or hits to the head with or without concussions,” Dr Omalu told The Irish Times. “If you look at all the protocols that have been established by sports leagues across the world they are making it about concussions.

“What we need to let people know, especially parents, because children are my focus, is: when you play high impact sports, and by that I mean American Football, ice hockey, boxing, mixed martial arts, wrestling and rugby, your head is exposed to repeated blows and you may not suffer a documented concussion. All it takes is one season, one concussion and your child’s brain is permanently damaged.

“The brain has no capacity to regenerate itself,” Dr Omalu, who was played by Will Smith in the film Concussion, said.

Symptoms of CTE initially include a range of ailments such as dizziness and headaches, but these issues may not manifest themselves until a number of years after the trauma occurs. As the condition deteriorates, patients can experience memory loss and progressive dementia among other things.

“These games, you can never make them safe. You can never take away the head from rugby or boxing or American Football. We need to let people know that.

“That is why potentially dangerous games should only be for adults. Just like the rules we have for sky diving, for car racing. Only adults should be allowed play dangerous games.

“The same should apply, based on what we know today, for these other sports.”

Regarding World Rugby’s continued advocacy of the head injury assessment process, Dr Omalu said: “To subject a player to a neuropsychiatric test and tell him you have not suffered brain damage is malpractice.

“But we continue to let it happen because we have some type of infatuational bond to these games, where we allow these games to take over our lives and our way of thinking.

“So, the player suspected brain damage, you do a neuropsychiatric test, he passes, you send him back to the field, he receives 10, 20 more hits to his head. It is causing irreversible damage to his brain.

“I guarantee you five, ten years later he begins to have problems. Who is at a loss? Society, his family.

“That’s why I have taken this stance, as a physician; I swore to the Hippocratic Oath: First, do no harm. In 2017 there is no justifiable reason why a child under the age of 18 must continue to play rugby.”

Dr Omalu, after giving the keynote address at MyHealth public lecture Knocking Out Concussion in Sport this Tuesday in Dublin, will receive an honorary doctorate from the Royal College of Surgeons.

The talk will be streamed live at rcsi.ie/myhealth.