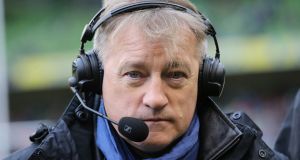 Eddie O’Sullivan will be working as an analyst for eir Sport’s coverage of Ireland versus Japan and USA. Photograph: Inpho

Ireland’s summer tour of Japan and USA will be shown live on eir Sport, after the broadcaster confirmed their exclusive package on Wednesday.

The first Japan Test is at the Ecopa stadium in Fukuroi City on June 17th (kick-off 6am Irish time). The second is at Ajinomoto Stadium Tokyo on June 24th (6.40am).

Eddie O’Sullivan is set to be in studio to analyse the three matches.

NBC are showing the US Eagles game live in America.

Glen Killane MD of eir TV & Sport says the deal shows the broadcaster’s commitment to rugby ahead of the RWC2019.

“We are delighted to play our part in the build-up, to what will be a highly anticipated World Cup and one we are delighted to have on eir Sport. We are also hugely excited for the WRWC later this summer and will be supporting the Women’s team as they hope to make history this August.”