Injury worries for the All Blacks ahead of Samoa warm-up 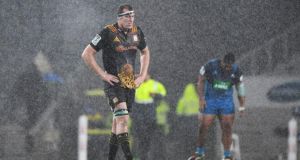 Brodie Retallick is the latest injury worry for New Zealand after he was ruled out of the Chiefs’ clash with the Highlanders on Friday night. Photograph: Andrew Cornaga/Inpho

The All Blacks have a number of injury concerns in advance of head coach Steve Hansen announcing a squad of 33 or 34 players for their upcoming Test with Samoa and three-match series against the Lions on Thursday morning New Zealand time, (6.0pm Wednesday Irish time).

Ryan Crotty has been ruled out of contention by the Crusaders coach Scott Robertson after suffering a rib cartilage injury in their dramatic win over the Highlanders in Christchurch last Saturday, after the centre had made an eye-catching return with his lines of running and high-class distribution.

The All Blacks’ outstanding hooker Dane Coles is another major concern, having been sidelined for several weeks with concussion issues.

However, captain Kieran Read has said the plaster on his fractured finger will be removed this week and he should be fit in time to face the Lions, as should the Blues flanker Jerome Kaino.

There is also slight concern over totemic secondrow Brodie Retallick, who along with Coles has been ruled out of the Chiefs’ clash with the Highlanders on Friday night.

Retallick’s absence is thought to be precautionary, however, after he suffered a head injury of his own during the Chiefs’ 46-31 win over the Waratahs in Hamilton last Saturday.

Chiefs coach Dave Rennie said: “He took a knock, obviously, in the weekend, and he still had a headache yesterday (Monday), so not enough time to pass the protocols, so he’s out for the weekend.

“He did pass the test and we could have put him back on, but we erred on the side of caution there, so I’m happy we did that. He said he’s not feeling too bad, but we’re not going to risk that.”

Leinster and Munster homing in on French opposition in Champions Cup draw 16:52
New Champions League format could see 36 teams in group stages 16:46
Sam Bennett has to settle for fifth in second stage of Paris-Nice 16:40
Ireland to play Qatar in Hungary on March 30th 13:46
Jacob Stockdale back in Ireland squad ahead of Scotland clash 10:50
Crossword Get access to over 6,000 interactive crosswords