How do parents support ongoing access to education for their children if they don’t have a laptop, home broadband or phone credit? 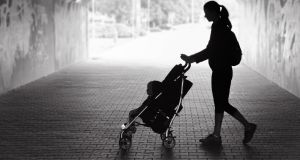 Mary is a young mother with four children, and she is struggling. She receives her social welfare payment every two weeks but now midway into the second week she can no longer afford food. Her children, at home all day, need to be fed, and she is really finding this a struggle financially.

She is grateful for the food parcels she recieves but is feeling the absence of the healthy breakfasts and lunches her children previously received in school and in an early years service provided by An Cosán.

Food is not this family’s only need. Mary needs help to cope with what she perceives as her children’s challenging behaviour, and the pressure she feels trying to keep them active and juggle their demands of her.

One of her children is due to start school in September. She is deeply anxious that the child will not be ready and worried about what people will say about her as a parent.

Another family we are supporting is experiencing heart-breaking family conflict and alcohol misuse. One parent has now left the home, leaving the remaining parent with four children. There are issues with self-harm and depression in the past. Counsellors are supporting this mother to keep her children active, engaged and safe and providing her with strategies to ensure positive mental health. Two psychotherapists are providing telephone support to both parents on a weekly basis, along with taking calls in between when requested.

Educational materials are delivered for the children and the mother is being provided with a phone with three months credit to keep in touch with her counsellor kindly donated by Vodafone. The support needed is intensive and this is only one family, but it will make all the difference for them and their future.

A mother in direct provision, shares a room with her three children. She was already struggling with mental health issues and now she has nowhere to study in peace. She feels she can’t protect her children all day from the over-crowding in the centre. She has been provided with a laptop to allow her participate in online classes. It is an unanticipated expense.

These are just three stories of people being helped by An Cosán - the largest Community Education provider in Ireland. There are hundreds within our community, and thousands more beyond. Most of the phone calls asking for help are coming after hours when children have gone to bed. Many people are calling us from their cars or toilets as they don’t have the luxury of a space where they will be not be overheard.

We are working to address the impact of the Coronavirus on our most marginalised but we are seeing growing desperation and despair. A lack of broadband, children having to share devices or no devices at all, insufficient space, a general fear around technology and literacy issues are placing some families at a huge disadvantage in staying connected with education.

How do parents support ongoing access to education for their children if they don’t have a laptop, home broadband or phone credit? How can parents meet the particular needs of children, such as those with special needs, when essential support is no longer available?

There seems to be a lack of understanding of the extraordinary impact of no access to schools and early years services for an extended length of time. I have worked in the international development sector where, even in the face of national disasters including epidemics, re-establishing education as urgently as humanly possible is always a priority.

Some of these children will fall so far behind in this period that they will never catch up with their peers or, worse still, they will fall out of formal education never to return.

The Sutton Trust, a UK charity, has released a report which found that 57 per cent of pupils in private secondary schools and 30 per cent of middle-class pupils are participating in daily online lessons, but only 16 per cent of pupils from working class families are participating daily. In the most deprived schools, many teachers reported that over a third of their students did not have adequate internet access. Less than 50 per cent of parents without higher education qualifications feel confident directing their children’s learning.

Fragile families in difficult circumstances need our national government to ensure there is an on-the-ground response. The way to deliver this already exists; community organisations are poised to act if resourced to do so.

We must invest in our social and community providers to tackle the coming tsunami by offering real time, responsive supports to help our communities recover and upskill for a world that is undergoing rapid and profound change.

This requires increased core funding allowing us to get on with the job instead of requiring CEOs to be fulltime fundraisers running from one State body and donor to the next trying to meet a fortnightly payroll.

This is what is most needed to sustain the efforts of those that during the crisis have been hailed as “essential workers”.

Heydi Foster is CEO of An Cosán