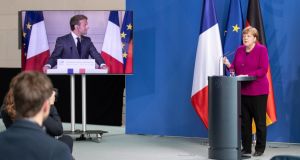 The accord marks the first time that Germany has agreed to mutualised debt in the EU. During the 2008 financial crisis, national governments were required to reimburse the loans they received from the EU.

France insisted that this recovery fund be based on grants, not loans, an approach that has been supported by Italy, Spain and Ireland, but opposed by Germany and the Netherlands.

Dr Merkel explained her change of heart in a video press conference with Mr Macron. “This is certainly the greatest crisis the EU has faced since its creation,” she said repeatedly, adding that the pandemic “has made us conscious of the shortcomings of the EU.”

Germany’s budget surplus allowed it to give massive state aid to German industry during the pandemic, raising fears that it was undermining the EU’s single market. A decision by the constitutional court in Karlsruhe on May 5th gave German law precedence over the European Central Bank, strengthening fears that Germany lacked European solidarity.

The accord announced on Monday seems to dispel those misgivings. “It is a leap forward in integration that was deemed totally impossible three months ago,” said Laurent Joffrin, the director of Libération newspaper. “Angela Merkel has understood, in the face of the nationalist threat, that the Union could fall apart and that German indifference could destroy the partners her economy needs.”

Prior to the Franco-German agreement, the EU agreed to €540 billion in loans to struggling economies. Dr Merkel said that between grants, loans, the still unagreed 2021-2027 EU budget and national measures, Europe will spend three thousand billion – three trillion – euro and will emerge strengthened from the crisis.

The accord was portrayed as a victory for Mr Macron. The French president, “sees his European determination, so often mocked, clearly rewarded,” Mr Joffrin continued. “Europe pitched from side to side in the crisis, but instead of sinking, she is sailing.”

In addition to the recovery fund, the French and German leaders advocate an EU health strategy, acceleration of Europe’s ecological and digital transitions, and greater European economic and industrial sovereignty. Health is not currently a European competency.

The president of the EU Commission, Ursula von der Leyen, will use the Franco-German proposal as the basis of a plan which she will present to the 27 EU countries on May 27th.

Under the Macron-Merkel plan, the EU will borrow the €500 billion on international markets and distribute it to the regions and sectors most adversely affected by the pandemic, for example tourism in Italy. The debt will be reimbursed by the EU through its Multiannual Financial Framework, or MFF.