Plan to reopen economy will fail if childcare not taken seriously 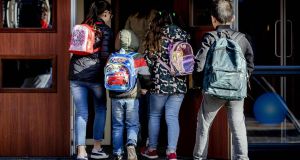 Primary school students arrive at school in The Hague, on May 11, 2020 as Primary schools, playgroups and childcare reopen amid the pandemic of the novel coronavirus (COVID-19). (Photo by SEM VAN DER WAL/ANP/AFP via Getty Images)

Late on the evening of May 13th, Minister for Children and Youth Affairs Katherine Zappone announced that arrangements to provide childcare to essential healthcare staff had been abandoned.

That this announcement came two months after the Government ordered the closure of childcare facilities indicates the extent to which childcare remains a peripheral, private matter in Irish public policy.

The working assumption appears to have been that the gap created by the closure of childcare facilities would be filled – as it always had been – by other family members, on an informal and unpaid basis. This assumption was made despite the fact that such informal care is often provided by grandparents – a group highly vulnerable to Covid-19 – and that creches were being closed because of the possibility that children were potential “super spreaders” of the virus.

Analysis by the Economic and Social Research Institute of Irish Labour Force Survey data shows just how important childcare services are to the fifth of the Irish workforce deemed essential by the Government:

- Almost seven in 10 are women, with women accounting for eight in 10 employees in the relevant health sectors;

- More than half of essential employees have children; 43 per cent are part of a couple, while 9 per cent parent alone;

- Lone parenthood among essential employees is nearly twice the rate among employees overall (5 per cent) – 9 per cent of retail employees and 14 per cent of “other health employees” (eg healthcare assistants, hospital orderlies, pharmacy aides and medical imaging assistants) parent alone;

- Approximately two-thirds of essential employees have a child younger than 14, with health professionals and those in defence and the armed forces most likely to have children under six;

- About 14 per cent of essential employees are not Irish nationals, and are therefore less likely to be able to rely on family members for informal childcare;

- Many essential employees are relatively low-paid – they have a very limited capacity to pay for additional childcare in order to do work that we regard as essential.

The statement issued by the Department of Children and Youth Affairs indicates that lack of insurance cover was a significant factor driving low uptake – only six childcare providers applied to participate in the scheme. But insurance cover for Covid-19-related claims has been an issue in a number of sectors since the crisis began.

Childcare regulations protect both children and staff; how these would be implemented in the context of a home-based programme should surely have formed part of considerations from the outset. And not for the first time, little consideration appears to have been given to how the childcare needs of the predominantly female, 27,000-strong childcare workforce might be addressed.

The childcare needs of essential employees were to be prioritised. It is difficult to square the idea that meat-processing plants – where health and safety guidance was clearly not being followed – were kept open, while childcare provision for healthcare staff was delayed and then abandoned.

The failure to put in place any provision for these employees does not inspire confidence about how the needs of non-essential employees might be addressed. But any plan to reopen the economy will fail unless this issue is treated as seriously as other key aspects of the response to Covid-19.

It’s time to recognise that childcare is an essential service. Zappone needs a new plan to provide safe childcare for all Ireland’s workers. Urgently.