Governments fear they will be squeezed out by richer countries 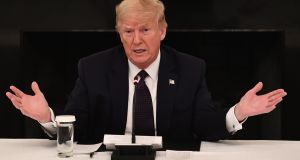 US president Donald Trump has threatened to pull out of the WHO unless it demonstrates its independence from China in an escalation of his efforts to blame Beijing for the pandemic. Photograph: Brendan Smialowski/AFP

The US is preparing to publicly disassociate itself from language in a World Health Organization resolution that will back the right of poor countries to ignore patents in order to gain access to a Covid-19 vaccine or treatment.

Many governments, particularly in Africa, fear they will be squeezed out by richer countries unless they can force companies that discover anti-Covid therapies to share their intellectual property with manufacturers able to produce them cheaply at scale.

African ambassadors in Geneva, where the WHO is based, said US diplomats had sought to persuade them to support a dilution of language in the resolution, a proposal they had rejected.

According to several people familiar with the situation, the US was planning to disassociate itself from part of the resolution but talks are continuing. Although the US will make its objections clear, the resolution is expected to pass. The White House declined to comment on the negotiations.

The talks come as US president Donald Trump has threatened to pull out of the WHO unless it demonstrates its independence from China in an escalation of his efforts to blame Beijing for the pandemic.

The resolution is being discussed at a virtual two-day meeting of the World Health Assembly, the WHO’s governing body, which concludes on Tuesday.

“The US made some input trying to water down the references to Trips and patenting,” said one west African ambassador to Geneva, referring to Trade Related Aspects of Intellectual Property Rights. “The US is certain they will be the first to get the vaccine, but it might not be true.”

Illustrating the concerns about richer countries getting earlier access to any vaccine, Ellen ‘t Hoen, director of the research group Medicines Law & Policy, said it took a decade for African countries to get affordable Aids medicines, during which time millions of people died.

“What we have seen in the past is that high-income countries rush to the front of the queue and leave the rest of the world to fend for themselves,” she said.

In 2001, in the so-called Doha Declaration, World Trade Organization ministers said that governments could overrule intellectual property in a public health emergency.

The US and other nations with strong pharmaceutical sectors, including the UK, Switzerland and Japan, wanted language explicitly referring to the Doha Declaration removed from the resolution, according to an early draft seen by the Financial Times.

They wanted instead to emphasise the role of intellectual property in promoting innovation and to encourage equitable access to any Covid vaccine or treatment through voluntary mechanisms, including donations and partnerships.

The debate over intellectual property is part of a broader tussle between China and the US over who develops a vaccine first and how it will be distributed.

Xi Jinping, Chinese president, on Monday appeared to back the position of developing countries, when he said any vaccine “will be treated as a public good”.

As the source of the outbreak, China has a special responsibility to pay more and to give more

In an address to the World Health Assembly - itself controversial because of US accusations that Beijing covered up the initial Covid outbreak in the Chinese city of Wuhan - Mr Xi said China would donate $2 billion over two years to respond to the pandemic, especially in developing countries.

The White House described the Chinese offer as a “token to distract from calls from a growing number of nations demanding accountability for the Chinese government’s failure to meet its obligations...to tell the truth and warn the world of what was coming”.

John Ullyot, the White House National Security Council spokesperson, added that “as the source of the outbreak, China has a special responsibility to pay more and to give more” to the global health body.

In a clear reference to China on Monday, Alex Azar, the US health secretary, slammed “at least one member state” for making a “mockery of their transparency obligations, with tremendous costs for the entire world”.

Mr Azar also hit out at the WHO for its alleged “failure to obtain the information that the world needed”, which he said had “cost many lives” by allowing the outbreak to spin out of control.

Diplomats said Washington had pushed strongly for language calling for an independent investigation “at the earliest possible opportunity” into the WHO-led response to the outbreak.

In a letter seen by the FT, African ambassadors in Geneva said attacks on Tedros Adhanom Ghebreyesus, the Ethiopian director-general of the WHO, “from some quarters” had an “unfortunate racial overtone”. In the letter, first published in Africa Confidential, a specialist newsletter, the ambassadors said in an apparent dig at Washington that “failures at the national level should not be attributed to the WHO”.

In April, Mr Trump said the US would suspend funding of the WHO. Some diplomats thought an independent inquiry could be a precondition for Washington to resume contributions. Mr Trump on Monday did not comment on the Chinese announcements but repeated his recent attacks on the WHO, saying it was “a puppet of China”. – Copyright The Financial Times Limited 2020

1 Why gift a son now if it eats into his tax-free inheritance threshold?
2 Supreme Court in Dublin clears Bernie Madoff Ponzi loss case for hearing
3 Big Four told to outline plans for audit split in UK by October
4 Mortgage arrears: Prevention is definitely better than cure
5 All parties to High Court hearings told to wear facemasks
6 Can we finally say farewell to the scourge of hot-desking?
7 Dispute over €2.95m sale of Georgian property struck out
8 ‘The rental situation stops me moving back home’
9 Chris Johns: Economic self-harm is the root of populism
10 Why are markets booming when a crash is on the way?
Real news has value SUBSCRIBE