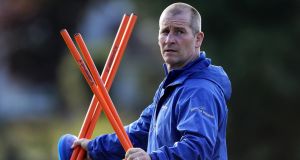 “Pretty much everything has been given to Leinster and, indirectly, to Ireland,” Stuart Lancaster says when he considers how the knowledge he gained during seven years at the heart of English rugby has been jettisoned by his own country. The Leinster coach speaks without bitterness and, having reflected movingly on the recent death of his father and the bruising aftermath of being sacked by England after the 2015 World Cup, he sounds philosophical.

Lancaster is clearly happy coaching Leinster alongside Leo Cullen and they are the bookmakers’ favourites to retain the European Champions Cup. Leinster also supply the core of the Irish squad which, having won the Grand Slam last season and beaten New Zealand two months ago, face England in Dublin on February 2nd in their opening Six Nations game. The mood in Dublin is calmly confident and Lancaster, a proud Englishman, looks at home in a successful Irish environment.

English rugby, in contrast, appears uncertain. Only one Premiership club, Saracens, may qualify for the European quarter-finals this weekend while Leinster, Munster and Ulster should seal their places. After a dismal run of five consecutive defeats, England improved in the autumn. But they will be tested with fresh force in Dublin. It prompts the question as to why Lancaster’s insights have not only been lost to English rugby but allowed to flourish in Ireland.

“When you’re coaching England, and I did it 50 times, you learn a lot,” Lancaster says. “You’ve been around 12 Premiership clubs, you’ve coached many great players, you’ve coached against great countries and great coaches. So your technical detail, your understanding of the game, grows exponentially. I learned through the good times and the bad times. I learned through failure and success. I gathered lots of knowledge and experience with England.”

Lancaster was not shocked to lose his job as England head coach in 2015 – but he was ready to commit himself to the RFU and return to the work he had done so well from 2008 to 2011 when overseeing the development of young players and coaching England Saxons. But the willingness of a humble man, and an outstanding coach, to step back into development work was not accepted. Lancaster remained in the rugby wilderness for nearly a year until, in September 2016, he was invited to join Leinster.

Johnny Sexton, voted World Rugby Player of the Year in 2018, helped persuade Lancaster. “He dropped me a text while I was deciding,” Lancaster says. “It was nice of Johnny because when you’re bruised by the World Cup experience it’s good to feel wanted. When I met him he said: ‘We could see how well England were doing when we played you. We could see the improvements.’ With England we had a pretty good track record against Ireland.” England beat Ireland four times out of five during Lancaster’s tenure.

Before we talk at Leinster’s headquarters at University College Dublin, I watch Lancaster work with the squad. Even this snapshot underlines their cohesion.

“It’s different in England,” he says. “After A-levels many people in England go to university in a different city. In Dublin, if they go to university they stay in the city. So this group have gone to school together, played schools matches together, gone to university together, come through the academy together. The sense of identity and connection is incredible. Leinster have got more local players than any club I’ve been involved in. When I first arrived I talked to players individually. I’d say: ‘Where are you from?’ Dublin. ‘Where did you to go to university?’ Dublin. ‘Where would you like to go in the future?’ They all wanted to stay in Dublin and play for Leinster.”

Rather than being parochial, Lancaster believes this strong bond is inspirational. “The cohesion, the sense of community, is huge. People often talk about Ireland having an advantage because they prioritise Europe over domestic competition. But people sometimes fail to recognise there are some great players here. If you had to pick a Lions team right now there would be quite a few players from Ireland in it.”

Last Saturday, when missing the injured Sexton, Leinster still dominated Toulouse, regarded as the form team in Europe, and won 29-13. The depth of their squad was obvious. “We like to think we can rest and rotate players and still win,” Lancaster says. “We’re 19 points clear in our conference in the Pro14 – where there are lots of very good coaches. Dave Rennie, Richard Cockerill, Johann van Graan. It’s a similar model to New Zealand where you’ve got head coaches contracted to the Irish union. You’ve also got players contracted to Ireland. For a country that’s small in population it’s the only way that you’re going to make it work.”

Lancaster pauses when asked to compare his immersion in Leinster with the far more difficult year when he was out of work. “You haven’t got a sense of purpose without working full-time. You also spend all your time reflecting. For me my last game had been in the World Cup. All the stuff beforehand was erased. In everyone’s mind it became very hard to look further back than the Australia and Wales games. You also think what comes next? How do you get out of the position you’re in? A lot of national coaches often don’t come back.”

How did he stop becoming depressed? “I’m pretty resilient. And getting out of England during the Six Nations in 2016 helped. I went to New Zealand, Australia and South Africa and it was great. It gave me some thinking time.”

Did he doubt himself? “No. But I felt pretty battered. The sense of responsibility for not achieving success weighed heavily on my shoulders. I was in charge of a national team at a home World Cup and we didn’t achieve what we wanted. I was confident many things we did in the build-up went well. But 20 minutes of rugby changed everything.”

Lancaster is still grieving the loss of his father, who died unexpectedly last September, and he remembers how his dad was wounded by the World Cup. “Some of the criticism levelled at me hurt him. But we have a great circle of friends, a very small community [around his parents’ home in Cumbria]. They only knew me as Stuart – rather than the England head coach. So whenever I came home I was never treated differently.”

Had there been concerns about his dad before his death? “No, he was in fantastic health. I came off the training field and saw five missed calls from my brother. I knew that wasn’t good. My dad had collapsed on the farm with a cardiac arrest. My mum rang 999. The officers were brilliant and talked her through CPR. But, because we’re in a rural area, it took a while for the ambulance to come. Mum did an amazing job keeping him alive amid such trauma and the paramedics got his heart restarted. I got the first flight back to England. Obviously you go through the first few days in the hope he’ll wake up, and say: ‘What happened?’ His heart and lungs were functioning but there was brain damage. The lack of oxygen during that period ultimately took his life.”

The hurt is etched across Lancaster’s face but his voice holds firm. “He was 78, but he was a fit farmer. I’d spoken to him the day before, about coming to watch my son play. I was trying to navigate the start of the season and the players and the club were fantastic. I was very touched that people from Leinster came to the funeral. In Ireland, a funeral is such a big thing and they supported me. This tiny church was full. We couldn’t fit everyone in.

“In the eulogy I spoke about why he was such a great man, and how he developed our personalities. I talked about the four seasons. What spring feels like on a farm, and what we did in spring, summer, autumn and winter. It was heartbreaking writing it but I wanted to deliver it properly. The emotion was deepest when I was on my own practising.”

Lancaster shakes his head and then smiles. “Leinster were fantastic and our friends rallied round. But the hole is still so big. Every day I think I’ll give him a ring. But it was great he could see me happy in Dublin, in the company of people so like the people from Cumbria. For him to know we won the European Cup, and come see us win the Pro14 final, was very special. He saw me happy again.”

Lancaster is close to many players in both teams. “Ireland, obviously, but all the England players too. I gave most of them their first cap. It’s a special moment, as a coach, to say to a player you’re going to represent your country for the first time. You never forget that. I’ve coached lots of the England players. If I go to the match I’ll bury myself into a little box – because part of the charm is concentrating on the game.

“England, with Billy [Vunipola] coming back, have a seriously powerful team. And the way that Eddie Jones plays, he’ll make it a challenge for Ireland. But Ireland are confident, cohesive, organised. The challenge, for both teams, is to hit the ground running.

“If you win the first game, your momentum comes. If you lose, everyone questions you. It’s a big game for both teams.”

Lancaster sounds intrigued and it seems as if the pain of his demise in Test rugby has been blunted. “It’s not to say it doesn’t hurt and that I don’t think about it a lot. I still do. Roy Hodgson, the former England football manager, told me: ‘The scar will never go, but it does fade’. It helps to have a new team, new players, new people, new challenges – like I do now.”

The Leinster coach smiles. “I’m only 49, so I want to keep learning and developing. I feel like I’ve got a long way to go.” – Guardian