Munster in good shape for another crucial Thomond showdown 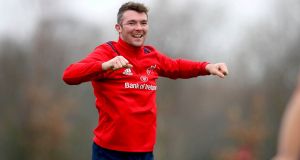 Peter O’Mahony: back in the Munster side for Exeter’s visit to Thomond Park. Photograph: Ryan Byrne/Inpho

Lights, camera, action, as they say in the movies. With a 5.30pm kick-off, the lights are a prerequisite. As for the cameras, they’re all there, both free-to-air and pay-per-view. And with an Anglo-Irish last day showdown, the action is guaranteed.

At face value the scene is set, to all intents and purposes, like a classical shoot-out. Gunfight at the Thomond Park Corral and all that, albeit these are the Chiefs rolling into town, and hunting perhaps the most prized Heineken Champions Cup scalp of them all, Munster at their Limerick fortress.

The declared fitness of Munster captain Peter O’Mahony is a huge boost for the home side. The net effect is only one change, John Ryan rotating with Stephen Archer at tight-head, from last week’s 41-15 win away against Gloucester. If this selection does line up for the kick-off, then it amounts to a first-choice team.

Conor Murray makes his 50th tournament appearance just over seven years on from making his competition debut against Northampton Saints in the famous 23-21 victory at Thomond Park in November 2011.

Likewise, Exeter make only one change from the side which beat Castres last Sunday, and also at tight-head.

England prop Harry Williams starts in place of the ill Tomas Francis, meaning Australian international Greg Holmes is added to the bench from their plethora of Test props.

Saracens apart, Exeter are possibly the most dangerous team Munster could have met at this juncture.

Having failed to win any of their first three matches – which would make them the first club in the history of the competition to qualify from such a start – Exeter are in bonus territory. This is almost a free hit.

Furthermore, in their own way, cracking Europe has becoming something of an obsession for them. This is their sixth successive year in the Heineken Champions Cup and they have only one quarter-final – which they lost 25-24 to Wasps three seasons ago – to show for their efforts.

In three of the other four pool campaigns they ran into the eventual winners, engaging Leinster in two arm-wrestles last year that seemed to scar them for the rest of the season.

Exeter are also a different proposition with Jack Nowell in their ranks. Warren Gatland once said that if he was a Premiership coach and could sign one player, it would be Jack Nowell, for his professionalism, versatility, pace, footwork and work-rate.

Nowell’s return last week had a galvanising effect on team and crowd alike. More than most back three players, he goes hunting for the ball. The more touches the better.

Within three minutes of his first game since early November last week, Nowell appeared at a ruck on halfway, before sniping and sidestepping three tackles on the way to a try. Baxter could even take him off after 55 minutes.

Only Cheslin Kolbe has beaten more defenders (39) than Santiago Cordero (34) and Nowell (23 in just three matches) in this season’s competition.

Granted, it’s doubtful that Munster will afford Nowell, Cordero and co the same space granted them by Castres. With Chris Farrell back in their ranks, their line speed was notably quick and in the faces of Danny Cipriani and co, only twice being outflanked in essence, which as much was down to the good play by Gloucester as anything else.

Farrell certainly added to Munster’s attacking game, witness how it required three defenders to eventually haul him down before Murray picked out Joey Carbery for Munster’s first try.

Farrell also adds some deft touches and offloading, and it’s worth noting that Murray, Farrell and Keith Ears were all missing from the draw in round one.

Munster are loaded with ball-carrying. In addition to his customary workrate on both sides of the ball, CJ Stander’s carrying was also immense, and was the launching pad for both Carbery’s first try and Earls’ try.

David Kilcoyne, Niall Scannell, Tadhg Beirne and Jean Kleyn also give Munster plenty of oomph, and if they are running into traffic they have the varied kicking game, as well as running threat, of Carbery, the left-footed Rory Scannell and Farrell.

Munster’s lineout and maul, always better with O’Mahony there, have gathered momentum and their scrum won’t be weakened by Ryan’s promotion.

The breakdown, as ever, will be key.

Munster have won 33 turnovers to Exeter’s 19, and Beirne (with 11 turnovers the joint highest in the competition), O’Mahony, Stander, Tommy O’Donnell et al, can give them an edge here.

As in that drawn arm -wrestle at Sandy Park, this game also has one of the world’s best referees in Jerome Garces. So it could hardly be cued any better. Additional seating has been installed at both ends of the ground to boost the capacity of Thomond Park to 26,267. The place will be buzzing, and that’s just for the warm-ups.

Munster know a win will earn an 18th quarter-final, and they could squeeze through with a bonus point defeat, but a victory by more than seven points – eminently achievable in the modern game – would put the Chiefs through.

There will be shifts in psychological energy. There may even be times when Munster fall behind, when the Chiefs fans will be heard, and so, in equally time -honoured, Thomond Park fashion (where Munster have won seven of eight encounters against English teams on the last Saturday, and have won their last 11 games in this competition) it could be another white-knuckle ride.

But the home crowd are a knowledgeable bunch and will stay with the men in red until the last reel.