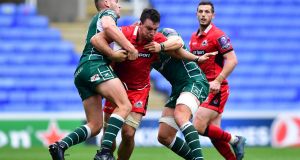 Scotland flanker John Hardie has been suspended by club side Edinburgh and told he will not be selected for next month’s autumn Test series amid a Scottish Rugby Union investigation.

No explanation has yet been given for the disciplinary action but it means he will miss Edinburgh’s Challenge Cup match with Krasny Yar on Saturday, as well as the Dark Blues’ international clashes against Samoa, New Zealand and Australia.

The 29-year-old was expected to be part of Gregor Townsend’s squad when it is announced on Monday.

In a statement, the SRU said: “Scottish Rugby and Edinburgh Rugby confirm Scotland international and Edinburgh forward, John Hardie, has been suspended from duty pending an internal investigation.

“As a result the player will not be available for selection for Edinburgh, or the Scotland National Team.

“It is normal practice with such matters that we are unable to comment further given the nature of the investigation.”

Hardie, 29, was born in New Zealand but qualifies for Scotland thanks to his Fifer grandmother.

He has won 16 caps since making his international debut in 2015, including three appearances at that year’s World Cup.

He was part of the Edinburgh team which beat London Irish 37-14 last weekend.

The news of his suspension comes as another frustration for Townsend, who has already seen skipper Greig Laidlaw and hooker Fraser Brown ruled out of next month’s Tests through injury.

Hardie becomes the second Edinburgh player to become the subject of disciplinary action in the space of the last week.

Club captain Marcus Bradbury has also been suspended by the Guinness Pro14 outfit after sustaining a head injury on a night out with friends two weeks ago.

However,the two incidents are not believed to be linked.

1 Six Nations: A 21st-century tournament that saw Irish rugby come of age
2 Six Nations: Ireland are contenders but England still the team to beat
3 Mike Catt hopes to have Irish backs purring in Six Nations
4 David Clifford sends everyone back to their corners unbeaten
5 Man United find respite in the mud as they hit Tranmere for six
Real news has value SUBSCRIBE

John Heslin strikes at the death to see Westmeath past Clare 17:35
Man United find respite in the mud as they hit Tranmere for six 17:32
Laois stage stunning comeback to draw with Roscommon 17:23
Longford deservedly take the points against Louth 16:34
Tipperary and Down share spoils in Division Three opener 16:29
Here is your handy guide to sport on television this week