Even by Munster standards, this should be special 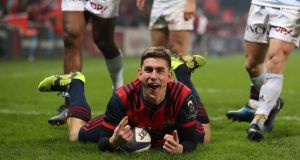 Even by the rather grand benchmark established by Munster’s European Cup Saturday nights at their Thomond Park citadel, this should be rather special. A game heavy with poignancy a year on from the passing of Anthony Foley will be marked by the unveiling of a plaque of the legendary number eight in the home dressing-room, and the game itself will, apparently, be graced by one of the greatest players ever to have adorned the game, some bloke called Dan Carter.

The plaque will be position alongside one of Paul Derbyshire, Munster’s late strength and conditioning coach, and there will be a minute’s applause before kick-off in memory of Foley. Munster will also wear commemorative jerseys for the match. With the permissions of sponsors Bank of Ireland, the players will have the Irish Heart Foundation’s logo on the front of their jerseys as a mark of their support, in tandem with Olive Foley, of a new charity which will drive CPR awareness across the province in memory of her husband.

On top of all this, it is a hugely important game, with the winners liable to assume leadership of Pool 4 before the competition returns with December’s back-to-back fixtures. Put another way, if Munster don’t win this, they’ll have a mountain to climb.

The inclusion of Carter was one of two surprises in Racing’s team announcement, the other being Pat Lambie - who made his debut off the bench in his customary outhalf position in last week’s win over Leicester - named at full-back instead of the brilliant Argentinian, Juan Imhoff.

Carter reportedly hasn’t trained this week due to the calf injury which has sidelined him for six weeks, dating back the second round of the Top 14 when Racing lost away to Agen.

There are six other changes in the Racing line-up, with Maxime Machenaud also returning at scrumhalf to lead the side. Anthony Tuitavke is brought back into the midfield mix, while the frontrow is rotated in entirety and Antonie Claassen is re-instated into a reshuffled backrow.

Influential hooker Dimitri Szarzewski and Rémi Tales, a third outhalf in their 23, are amongst a strong-looking bench.

For their part, as expected, Munster have had to plan without Niall Scannell (calf) and Tyler Bleyendaal, meaning Rhys Marshall makes his first start in Europe after seven appearances off the bench, with Kevin O’Byrne promoted from the As and in line for his Euro debut, while Ian Keatley starts. Their third change sees Jean Kleyn return to the second row after three weeks out with a nerve issue in his neck for a game that will also be Tommy O’Donnell’s 150th for Munster.

As an aside, several of the Racing squad, including Ronan O’Gara, were at the first public event in Racing’s new state-of-the-art indoor home at the U Arena on Thursday night, the first of three concerts by the Rolling Stones which will draw a total of 120,000 over the three nights. The first game to be held there will be the international between France and Japan on November 26th, with Racing’s first game at their new home coming on December 23rd against Toulouse. Munster visit there in round five of the pool stages in January.

O’Gara, for his part, was this week fined €15,000 and handed a ten-week ban as punishment for comments he made about French officials after Racing’s loss away to La Rochelle a fortnight ago. This means he can’t be on the sidelines during games, or take part in the warm-up, and is banned from the dressing room from ten minutes before the game until ten minutes after the full-time whistle, although this only affects Top 14 games

Laurent Labit, who along with the other head coach Laurent Travers has this week signed a new deal keeping them at the club until 2022, is currently serving a 15-week ban, which again only applies domestically. O’Gara is signed up until 2018.

All in all, Racing appear to be in a better place than last year, when suffering from the Bouclier de Brennus hangover. The challenge today for Munster is bigger, in every sense, and not least for their attack, as backs-cum-attack coach Felix Jones admits.

“When you look at the sheer size of them, getting any sort of momentum against them is actually really difficult because they’ve got players that are literally 120, 130 kilos. So that’s difficult to penetrate or get momentum against.”

Then there’s the question of containing them, whether it’s a typically potent French maul, or a combination of heavyweight carriers and offloading.

In particular, the offloading game of Fijian lock Leone Nakarawa is well nigh uncontainable. Known as ‘Octopussy’ in French rugby circles, which is very apt, at times it’s as if he’s playing a brand of basketball while everyone around him is playing rugby. “It’s like the ball is a miniature rugby ball in his hands,” says Jones. As Peter O’Mahony underlines, Munster have to guard the channels either side of him.

With the forecast looking pretty rough, most of all, Munster will need to improve their accuracy at the breakdown from last week, and convert pressure plays into points. They have it in them, but one suspects it may be a bare knuckle ride.