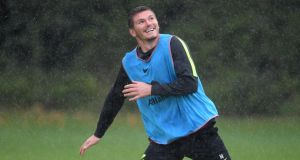 Owen Farrell of Saracens during training in St Albans, England. He will miss out on the clash with Racing as he remains suspended for a dangerous tackle. Photograph: Mike Hewitt/Getty Images

Saracens will attempt to defy the odds once again on Saturday knowing a similarly momentous occasion could be years away. A week after sending shockwaves across Europe by inflicting a first defeat on Leinster in 16 months, Mark McCall’s Champions Cup hopefuls face Racing 92 at La Defence Arena.

They must do so without talisman Owen Farrell, who remains suspended for a dangerous tackle, and with a squad depleted by departures in the wake of the salary cap scandal. Next season they will campaign in the second-tier Championship as punishment for repeatedly breaching regulations governing player wages, elevating the poignancy of their semi-final against Racing.

“We’re not sure when as a group we’ll play in a game of this significance for a while, so we’ve got to relish it while we’ve got it,” said director of rugby McCall. “It might be a couple of years before we play a game like this again, but hopefully we have more than one to go. If not then we’ll make sure we’ve enjoyed this week.”

Saracens have named an unchanged side against a team they faced in the pool phase, winning at Allianz Park and losing in the French capital. Alex Goode continues at outhalf in Farrell’s absence, while prop Mako Vunipola and scrumhalf Richard Wigglesworth are present after making successful comebacks from injury in Dublin.

Saracens are targeting a fourth continental crown in five years that would elevate them alongside Leinster and Toulon in the pantheon of European greats.

“This is a group of players who are accustomed to playing back-to-back knockout matches,” McCall said. “We’ve done that for the last five years. It’s the sort of time of year our players enjoy. We have backed up these kind of things in the past. We have grown up in this competition over eight or nine years. We learned the hard way, had some tough losses in quarters or semis before we started to win a lot of those games.”

Another Anglo-French semi-final will unfold the same day when Exeter look to justify their status as new Champions Cup favourites when they host Toulouse. Boss Rob Baxter has made one injury-enforced change with Sam Skinner named at openside as replacement for the injured Jacques Vermeulen, who was man of the match when Northampton were crushed 38-15 in the quarter-finals.

It is the first time the Chiefs, runaway leaders in the Gallagher Premiership, have reach this stage of the competition. “There is a genuine understanding that it can’t be a feeling of relief to be in a semi-final, it has to be a feeling of challenge,” Baxter said.

“There’s no feeling at this club at all of guys walking around with big smiles on their faces like they have just won the lottery. They are walking around like there is a job to be done. “I look at these games as the next biggest challenge we can face on our journey and we have got to make sure we give the best account of ourselves that we can. “The battles are all over the field – individually and in small groups. There are going to be some battle royals going on out there. It’s going to be an enthralling encounter.”

Gaël Fickou’s switch to wing a nod to what France expect from Ireland 20:39
Europa League round-up: Celtic let two-goal slip away in France as Lille level up 20:15
Barcelona presidential candidate aiming to bring Pep Guardiola back to Nou Camp 20:12
Connacht’s clash against Benetton postponed after Covid-19 outbreak at Italian club 19:36
Pádraig Harrington hot out of the blocks in Bermuda with opening 67 19:47
Crossword Get access to over 6,000 interactive crosswords