Saracens deliver the brutal blueprint on how to beat Leinster 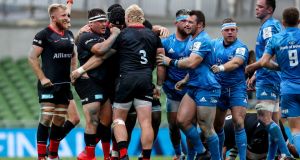 How to beat Leinster in 2020: step one, “harass” their inexperienced backf ield into making mistakes. Step two, build a lead before, step three, defending for your lives to the tune of 177 tackles.

And, just to be sure, break their scrum into little pieces.

This season will only ever have one blueprint to show how this can be done. This was Saracens, as brutally effective as we have ever seen them.

Mark McCall, the European champions director of rugby, summed it up better than anyone after ending Leinster’s record chasing campaign with a resounding thud.

“This group of players never cease to amaze us,” said the former Ireland centre following a 25-17 victory that wraps up an Anglo-Irish trilogy in Sarries favour (2-1). “They are a team that have been through a hell of a lot together in the last four or five seasons. I think you saw the solidarity that they have out there.”

Saracens appetite showed from the kick-off, from the way they patiently constructed a 15-3 wall for Leinster to scale - through the boots of Alex Goode and Elliot Daly - before a cruel scrummaging performance which somehow manages to enhance the reputation of Mako Vunipola.

Not that Vunipola needs much enhancing but back spasms were supposed to take him out of this quarter-final.

“I thought our scrum was unbelievable given that Mako hasn’t played a game for a long time,” said McCall. “To come and scrummage the way he did was incredible. They were lucky not to get a yellow card. It was certainly a big factor in the match.

“It was an incredible performance by our whole pack.”

Simply put, Leinster could not handle the early intensity.

“We put them under the kind of pressure that we hoped we could put them under,” McCall explained. “But you have got to go out and do it. The players were so engaged, so alive to everything.

“It showed everything that we hope we are about.”

McCall was asked to elaborate on how they figured out Leo Cullen’s team.

“There are not too many glaring weaknesses in this Leinster team. We talked about trying to put them in some position they are not normally accustomed to be in. Try and harass them in the back field as much as we could - force them to do things they would not ordinarily want to do 20 or 30 metres from their goal line.”

Every one of the starting Saracens forwards hit double figures in the tackle count. Jamie George, the England and Lions hooker, made 20 all by himself.

This is not the Saracens team that picked and ploughed Leinster apart in last year’s Champions Cup final. George Kruis is gone, Owen Farrell is suspended and South Africans like Brad Barritt and Michael Rhodes were one year deeper into their 30s.

Both were outstanding, Rhodes being named man of the match.

The excuse that Leinster were not battle hardened enough or tested enough by the interprovincial derbies to handle Saracens doesn’t wash either.

“It has been difficult for the group in the last five weeks to make the games in the Premiership have meaning,” said McCall. “We were worried if we could flip a switch and just turn it on against a team as good as them. But we can and we did.”

Waterford pull out of Antrim clash due to Covid-19 concerns 08:12
Golf courses to close under Level 5; Andy Farrell names team for Italy clash 07:52
Connacht coping with Covid case and injuries ahead of trip to Edinburgh 07:00
Dundalk quietly confident ahead of Europa League opener 06:00
Molde unlikely to see themselves as also-rans as they face Dundalk 06:00
Crossword Get access to over 6,000 interactive crosswords