Maro Itoje proves he has no peer in the northern hemisphere 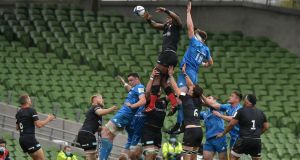 “We-know! We-know!” roared Maro Itoje after Leinster’s umpteenth mistake in the desperate wake of Alex Goode’s lovely break, dummy and try had made it 22-3.

Another scrum, another moment for mean old Saracens to rejoice.

Clearly, Itoje and friends knew something the rest of us did not think possible without Owen Farrell or George Kruis. Turns out they knew how they would stack up against Leinster, the Pro14 champions, who arrived into this Champions Cup quarter-final without the true preparation needed to survive such suffocating accuracy in the physical exchanges.

They certainly didn’t look ready for what hit them.

‘That’s Life’ by Frank Sinatra blared from the Aviva’s giant speakers at half-time as Itoje strolled off the turf between a flash of Leinster men running for cover. ‘You’re riding high in April, shot down in May’ old blue eyes aptly surmised.

“Come on, sprint,” someone local shouted, as Itoje smiled at the sight of opponents being more animated than any moment in the opening exchanges.

If we class this as a heavyweight prize fight then it was a mismatch in weight classes. A familiar Irish failing against the big teams. Mauled into submission, battered in early collisions, repeatedly out scrummaged, there is no debate about the superior team on view. Or the leading secondrow in the northern hemisphere.

And, truth be told, Itoje was quite enough. Visible whenever Saracens needed to slow one way traffic, easing from third to fourth gear, until he slammed into James Ryan on the gainline. Both men collapsed to earth. Plenty of pain and no gain for Ryan.

There was also a chance to pulverise Johnny Sexton. One of those borderline legal hits, that he choose not to make on this occasion. A few seasons back, on this very pitch, Itoje got away with several acts of naked aggression. Nowadays, the rules are tighter and Maro knows the score.

Michael Rhodes took the opportunity later on and only coughed up a penalty.

Quietly effective was Itoje. The intercept of Luke McGrath’s readable pass initiated a 40 metre swing away from the Saracens try line with the scoreboard reading 9-3. That sneaky play appears to have originated in a pre-match conversation with referee Pascal Gaüzère. The offside line is where rugby matches are decided. Gaüzère was asked about when the tackler - or interceptor in this case - can make his move. He appeared to agree with the Saracens interpretation.

Like a bulldog chowing down on a piece of meat, the Sarries pack will never let go of such a clear lead.

At 15-3, with a half hour played, you sensed - from a decade of previous examples - that Leinster needed seven points before half-time. Into the English 22 came the blue ribbon Irish team. Their third penalty in quick succession forced Gaüzère into warning Brad Barritt to warn Itoje about the misdemeanour crime spree.

Leinster voices could be heard roaring their displeasure with how Sarries embalmed the very next maul but it ended up with a round of heavy back slapping for Springbok prop Vincent Koch as death by a thousand turnovers destroyed an invincible season at the first meaningful hurdle.

A third scrum penalty on 34 minutes allowed Goode to clear the Saracens lines as Leinster shoulders slumped in unison. After Itoje soared to claim the next lineout and the maul rolled towards halfway it felt like game, set and match.

What will frustrate Leinster coaches no end is the different manner in which Saracens’ scores came from exploiting different weaknesses in the Leinster armoury. Gaüzère set his stall out by punishing Andrew Porter for not rolling (3-0); Johnny Sexton was done for not releasing the tackler (6-3); a dodgy McGrath pass allowed Koch to clamp down on Robbie Henshaw (9-3); free wheeling scrums offered Elliot Daly the chance to put two massive strikes over the black spot (15-3); Duncan Taylor and Goode ripped open the Leinster midfield (22-3).

All ends up Leinster were beaten in that first half and just to reinforce the point, Itoje went ballistic after wrapping his massive forearms over Cian Healy for a turnover that stymied the first wave of what proved a brave second half revival. Leinster battled back with tries by Porter and Jordan Larmour to make it a five point game, but the exertions to get back to 22-17 eventually told.

A disgusted Sexton was forced off not long after Rhodes’ heavy, and marginally illegal tackle, but not before the captain created and converted the Larmour score.

Every Leinster gain during this period was met by Itoje resistance. As the English players roared their delight after each micro victory the long Londoner was paved out on the grass sucking oxygen, readying his boy for the next heroic act.

“At some stage in my life I would love to play abroad,” Itoje said during the week. “I’ve had a great life and I’m very privileged to play the sport I love and experience the things I have experienced; a different culture, a different style, just a different vibe.”

With Saracens heading to the Championship and the Lions touring South Africa next summer, the idea of rerouting him down to the Chiefs, Warren Gatland’s day job in New Zealand, is coming into focus.

He’s dominated all comers in Europe, may as well give him a run in Brodie Retallick’s jersey as the All Black - Itoje’s only true peer these days - sojourns in Japan.

Exeter’s Rob Baxter: Covid-19 poses threat to rugby’s viability 08:18
Waterford pull out of Antrim clash due to Covid-19 concerns 08:12
Golf courses to close under Level 5; Andy Farrell names team for Italy clash 07:52
Connacht coping with Covid case and injuries ahead of trip to Edinburgh 07:00
Dundalk quietly confident ahead of Europa League opener 06:00
Crossword Get access to over 6,000 interactive crosswords