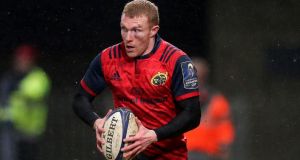 Munster’s Keith Earls: if he recovers from the knee injury to take his place, it will be a massive boost for Munster. Photograph: Gary Carr/Inpho

A number of issues around the composition of the Ireland’s two Champions Cup semi-finalists, Munster and Leinster – the teams will be announced at midday on Friday – made it a little trickier to highlight individual battles in the respective matches at the Aviva Stadium and Bordeaux.

There were one or two ruled out based on upcoming feature articles. Conor Murray’s battle with France and Racing 92 scrumhalf and goal-kicker Maxime Machenaud will be fascinating while acknowledging that their impact will be reliant on the quality of the platform provided by their forwards to some degree.

Murray’s influence is pivotal to Munster’s chances while Machenaud establishes a rhythm to his team’s play and is their point scorer-in-chief. Keith Earls and Teddy Thomas are two wonderful attacking talents, game-breakers and capable of scoring tries from modest circumstances. There is a suggestion that Simon Zebo may not play so that may see a slight reshuffle in the Munster back three with Earls and Thomas possibly not in direct opposition.

The tussle between the secondrows, Racing’s Munster old boy Donnacha Ryan and the outrageously gifted Fijian Leone Nakarawa against the ageless Billy Holland and the teak tough Jean Kleyn will extend to far greater realms than the set piece.

In the Leinster match, it seems that Jamison Gibson-Park will start as Luke McGrath (injury) and James Lowe (foreigner rule) miss out. He’ll be up against the Scarlets leading try-scorer in scrumhalf Gareth Davies, a huge running threat. It’ll be interesting to track the progress of Tadhg Beirne and James Ryan, ditto openside flankers Dan Leavy and James Davies.

However, Garry Ringrose and Scott Williams are two important attacking fulcrums for their teams with a happy knack of scoring tries in big matches.

Why he is so important: he made a massive contribution to Ireland’s Six Nations Grand Slam, a snapshot of his personal highlights his leap and catch of Johnny Sexton’s cross-kick in Paris in the build-up to the winning drop goal, his wonderful cover tackle in the dying embers of the Italy game and the way he tore the Welsh defence asunder.

If he recovers from the knee injury to take his place, it will be a massive boost for Munster. He’s happy off the pitch and that’s reflected on it, bringing a maturity and consistent excellence to complement his innate ability. When in possession he is a player who drives up the noise level in a stadium. Oh, and he leads Teddy Thomas 1-0 in the head-to-head Champions Cup try-scoring stakes this season.

Trivia: He was a flanker until Thomond under-15s. He recalled: “One of the lads never showed up and the coaches at the time, Pat Didigan and Henry O’Neill, asked me would I play in the centre. It was like: ‘No I don’t want to be a centre, I want to be a number seven.’ I wanted to be like my father [Ger]. Just this one time, they promised. I enjoyed being out in the centre and I stuck there from then on.”

Why he is so important: He is a lethal finisher, blisteringly quick, blessed with superb balance, possesses a strong leg drive and footwork that flummoxes defenders and has a predator’s instincts. He’s also got decent football skills and even in the tightest confines has the ability to bamboozle multiple defenders. He’s not as clever going in the opposite direction and can be a little impulsive at times in defence.

The priority for Munster will be to cut off the supply of ball rather than try and chaperone him when he gets his hands on it. As he demonstrated against Ireland in the recent Six Nations Championship, if a team switches off for a nanosecond, it’s all he requires to reach the try-line.

Trivia: He first played against Ireland at U-18 level in 2011, scoring a try but finishing up on the losing side as the Irish schoolboys won 19-17 with a try from Dan Leavy and 14 points from the boot of Luke McGrath. He has twice been dropped by France for off-pitch misdemeanours, the first time when he was two hours late for a training session and the second for “inappropriate behaviour” along with several team-mates on the night of a defeat to Scotland in the recent Six Nations.

Why he is so important: In a sport where the priority in attack is to create and exploit space, he possesses the talent to do so, both for himself and his team-mates. Even when he doesn’t escape the clutches of the defence, he invariably manages to work his way through or past the first point of contact primarily as a result of his excellent footwork, appreciation of angles and an ability to find soft shoulders.

He plays with an intelligence that is striking and his decision-making is generally on point and selfless in recognising when others are better placed. He will be a key player for Leinster from an attacking perspective while also acknowledging how important his partnership will be with Robbie Henshaw in shutting down the two Scarlets centres, Hadleigh Parkes and Scott Williams who have racked up more metres in attack than any of their team-mates.

Trivia: He is the grand nephew of Colonel Billy Ringrose, an Irish showjumping icon of the 1950s and 1960s. Ringrose won six individual international show jumping Grand Prix and seven Nations Cup team events, including being part of the first mixed Army-civilian Irish team to win the Aga Khan Cup in 1963, along with Diana Conolly-Carew, Seamus Hayes and Tommy Wade.

Why he is so important: He is a big-game player with the temperament to match his obvious ability, something that is reinforced in his try-scoring statistics for Wales as he’s dotted down against New Zealand, Australia, South Africa, Ireland and perhaps most famously of all against England at Twickenham in 2012 during a Grand Slam campaign. He would have even more caps but for the presence of Lions Jamie Roberts and Jonathan Davies in the national set-up.

He’s formed a brilliant partnership at club and country with Hadleigh Parkes and the Scarlets midfield has been central to their attacking patterns in both racking up the metres and also creating space in the wider channels.

Trivia: Players take motivation from wherever they find it and this week Williams had the bookmakers firmly in his sights ahead of Saturday’s game. He explained: “Yes, it has annoyed us. It was the same last year when nobody expected us to win, but we knew we could do it. The bookies have ruled us out completely. We can’t gamble ourselves as players, but I think we are 5/1 to beat Leinster and 9/1 to win the whole competition. If I had £20 spare I’d definitely put it on us beating Leinster and winning the whole thing.”