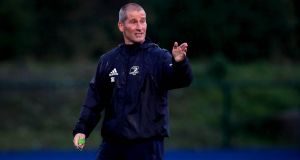 Stuart Lancaster: “I know there’s been a lot of noise about Ireland not doing well, but we shouldn’t forget how much Joe has done for Ireland.” Photograph: Ryan Byrne/Inpho

Since he arrived to Leinster in 2016, Stuart Lancaster has become a kind of anointed fount, from which  much rugby wisdom, observations and opinion spouts. Everything from Saracens and their salary cap, or lack of, to Brian O’Driscoll and Leinster’s structured “chaos” has been run past the former England head coach .

The 50-year-old is regularly referenced by the players, always as a positive influence. And while he is perceived as the coach to which you can ask almost anything, O’Driscoll’s  “C” bomb landed just after the Irish rugby community was coming to terms with Ireland speeding towards their World Cup exit.

O’Driscoll wondered aloud whether Lancaster’s arrival and his different focus to that of Joe Schmidt upset the apple cart. He observed that Lancaster was about unstructured play rather than Schmidt’s focus around set-piece.

He asked whether that cast doubts into players’ minds about the way they needed to train and what they needed to focus on, and if that dynamic changed things. Because, O’Driscoll explained, whenever he heard Leinster players talk about Leo Cullen and Lancaster, everything was about “unstructured chaos”.

“To be honest I don’t really follow his train of thought. Was he suggesting that Ireland struggled because Leinster did something differently?” asks Lancaster.

“I think there is a slight misinterpretation about what that phrase means. It’s not like we have a completely unstructured game and my training sessions are chaotic, and there are no principles or there is no structure about what we are trying to achieve.

“What we are trying to achieve is a balance between the real importance of starter plays and execution at set-pieces and everything else – to be very good at that but also be very good when the game becomes into phases three to 10, let’s call it.

“Not only that, but you’re equally as comfortable in defence, and you have got a very clear system in defence about how you are going to defend.

“I can’t comment on Ireland because I wasn’t there, and I don’t know what they did in camp and how it all played out.But I do think that the comfortable-in-chaos point actually has some very clear underpinned structures behind it and some very strong principles that myself, Felipe [Contepomi] and Leo [Cullen] applies here.

Lancaster doesn’t play a blame game, and points to days when Leinster did not deliver when they needed to under pressure. It comes just a few weeks after Cullen pointed to Leinster’s 3-0 win in Italy as a success. The team won under difficult pitch conditions and in that context played a hugely successful game, which wasn’t their game but earned them a dug-out win.

Lancaster’s connection with Ireland has always been multi-pronged, and it will continue to be like that when Andy Farrell holds his first Irish sessions later this month and again in January as players begin to refocus on the 2020 Six Nations championship.

He retains a strong relationship with Farrell, with whom he began working with in 2010 before coaching England together. Mike Catt and Lancaster also coached together four years in England. Simon Easterby and Lancaster played rugby together when we were with Leeds back in 1997, and John Fogarty was until recently with Leinster.

If anything the relationship with Lancaster and Leinster with the Irish coaching team is taking on greater dimensions than when Schmidt was there.

“So that’s not to say they will play the same way as Leinster,” says Lancaster. “That’s not what it’s about. International rugby is different where you are trying to merge styles into one system.

“I think we shouldn’t forget. I know there’s been a lot of noise about Ireland not doing well, but we shouldn’t forget how much Joe has done for Ireland.  When I arrived here the fingerprints of Joe were all over this organisation in a really positive way, and they’re still there now.”

The World Cup review, he says, will be forensic. Only one team won this World Cup, and everyone else will be looking at themselves thinking “why did we lose”, he says. For that type of filtering of the gritty details there are few better than Schmidt, and if it is to be his parting shot with Ireland it may have high value.

“We sat down and you review your selection decisions, you review your camp, you review the training you did in the camp, the warm-up games. You review the logistics, the medical, the S&C. Everything needs to be reviewed and learnt, and I don’t know it works in Ireland but I know in England I was involved in that in every tournament and competition,” says Lancaster.

“And I hope it benefits the new coaching team because I for one will be giving them everything I possibly can to help them succeed.”