Perfection the standard set for Munster and Johann van Graan 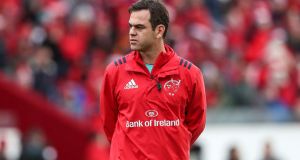 Perfection is the standard. That’s what the IRFU place lightly upon Johann van Graan’s young shoulders.

Blame Joe Schmidt and Rassie Erasmus for the weight. Perfection eventually demands victory in a European semi-final. It also requires the collection of Guinness Pro14 silverware.

Perfection, as Munster of old know so well, is winning deep down in France.

“Every week you strive for the perfect game,” says Van Graan. “I’ve only been involved in two or three (games) in my whole career where you say ‘that’s close to the perfect game.’”

Perfection for Munster means Jean Kleyn and Chris Farrell fit and playing. So perfection is impossible on Saturday. It needs the continual thumping presence of Peter O’Mahony and CJ Stander, with Tadhg Beirne dovetailing behind the Ireland starters. It needs a world class lineout and the ability to re-gather possession from rugby’s new “restart,” the breakdown.

“We’re not there yet,” Van Graan warns before noting glimpses of this Utopian ideal. “Our first 30 minutes against Edinburgh, from an attacking point of view, the way we moved and the speed we were at, I think we were pretty close then. The second half of round six against Castres last year, I thought we (won 48-3) played really well.

“Some parts of the Toulon (quarter-final) stand out, but a perfect game, no not yet.

“That’s the beauty of it,” he continues. “We have such a long way to go. We as a squad acknowledge that there’s a European champion setting the benchmark at this stage. We’re quite a way off that and we have to fight to get there.”

They are always up for a fight.

Attaining any sort of victory in Castres, in this increasingly fractious rivalry, demands perfection from Carbery off the kicking tee. Defensive perfection would also help.

“We must first treat the heads,” said Castres coach Christophe Urios after Sunday’s 30-5 defeat in Limerick. “The return match this weekend will be important. We are still alive in this European Cup. And I feel that the guys want to produce a good performance because it’s been three weeks since they have. They are frustrated, disappointed and a bit angry. They know that they must increase the level by at least 20 per cent.

“But it’s okay. If you went into the locker room right now, you’d even see the guys drinking champagne. They celebrate the birth of Amber, the little one of Mama Vaipulu. It’s part of our customs.”

The anger Urios spoke of was evident in the small exchanges. Rory Scannell pointing to the Thomond Park scoreboard. Conor Murray laughing after another bitter sounding exchange of French adjectives.

Castres are Top 14 champions. They guarantee brutality at home but Munster, the organisation, know all about this journey. Familiarity breeds animosity. 15 times the teams have come into close contact since 1996. There’s an edge of viciousness to the fixture dating back to Ismaella Lassissi biting Peter Clohessy at Stade Pierre Antoine in 2002. Castres responded with unsubstantiated accusations of racism.

Saurday also marks Munster’s return to a city that saw the end of Erasmus’s 15-month term as director of rugby (a defunct role ever since). In October 2017 the Irish rugby family were scrambling to get a handle on the 37-year-old coach that David Nucifora had decided would guide Munster into the future.

“Listen, he will bring work ethic, a hell of a lot of experience and he is used to pressure situations,” said Erasmus of a man who he wanted to keep in the Springbok system. “He is a guy that coached (South Africa) when they lost 57-0 against the All Blacks and he was one of the guys that tried to turn it around the next week (when South Africa only lost by a single point to New Zealand).

“He has won three Super Rugby titles as an assistant coach (of the Bulls). He has experience across the range, from attack to defence and he is a very good analyst. He is a wonderful attacking coach and he will add a lot to the lineout work that Jerry Flannery is doing. He is the master of all, if I can put it that way.”

The suspicion that Erasmus was merely offering his successor a ringing endorsement proved untrue. Munster as an attacking entity have clearly evolved.

“He grew up next to the Bulls rugby field and he worked with guys like Fourie Du Preez and Victor Matfield and those kind of guys for years and years.”

Replace du Preez and Matfield with Murray and O’Mahony and this coach’s life keeps gliding along. The central gifts of Carbery and Beirne have also been gratefully received.

“There is a great character coming to Munster,” Erasmus promised.

This has been borne out. Perfection does seem a little ambitious, but it’s the standard nonetheless.