‘He’s made of the right stuff. He’s got great energy, charisma, ideas. He’s a leader of men’ 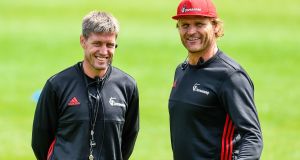 Canterbury Crusaders coach Scott Robertson is far more than the breakdancing, surfer dude that he is portrayed as and is ready to step into the All Blacks role, according to former Ireland outhalf Ronan O’Gara.

New Zealand coach Steve Hansen said earlier on Friday that he would step down following next year’s Rugby World Cup, with Robertson emerging as a dark-horse replacement.

Former All Blacks loose forward Robertson has led the Crusaders to successive Super Rugby titles but is out of contract after the 2019 season and last month said he would be interested in the national job, should Hansen step down.

O’Gara, who joined Robertson’s coaching staff last year, said he felt the 44-year-old was more than capable of leading the national side and to paint him as a ‘hang loose’ type of character did not show the full picture.

“I think it will definitely happen, there’s no doubt it,” O’Gara, who played 128 times for Ireland, told Stuff Media at a Crusaders pre-season training event in Christchurch when asked if Robertson could step up into the All Blacks role.

“He’s made of the right stuff, Razor (Robertson). He’s got great energy, charisma, ideas. He’s a leader of men,” he added of the coach who is a keen surfer and enjoys celebrating title wins with an on-field breakdance.

O’Gara acknowledged that while Robertson benefited from working with an All Blacks-laden Crusaders side, he still needed to get the best out of them.

Until Robertson guided the Crusaders to their eighth title in 2017, the Christchurch-based side had not won the Super Rugby competition since Robbie Deans left in 2008.

He also led provincial side Canterbury to three national titles and the ‘Baby Blacks’ under-20 side to a world title in 2015.

“He’s working with very capable players, no doubt about it,” O’Gara added.

“But at the same time, someone has to strategise everything, and organise and run the show, and he does that well.

“It’s a pleasure working with him.”