Leinster make three changes for visit of Bath to the Aviva 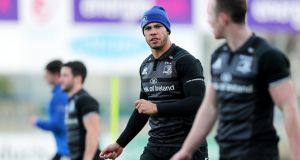 Adam Byrne starts on the wing for Leinster on Saturday. Photograph: Laszlo Geczo/Inpho

Leinster head coach Leo Cullen has made three changes to his team to take on Bath in Saturday’s Champions Cup encounter at the Aviva.

After their 10-17 away win last weekend Leinster will be hoping to close the gap further on pool leaders Toulouse, while Bath for their part need a win to ensure that they retain an interest heading into the final two rounds.

There is a change in the back three from last week. Jordan Larmour moves to fullback from the right wing with Adam Byrne coming onto the wing. James Lowe continues on the left.

There is also a change in the number 12 jersey with Rory O’Loughlin starting alongside Garry Ringrose for his 50th Leinster cap.

It’s as you were in the halfbacks with Luke McGrath again partnering captain Johnny Sexton.

There is only one change in the pack so it’s as you were in the tight five with Cian Healy, Seán Cronin and Tadhg Furlong in the front row and last week’s man of the match James Ryan again partnering Devin Toner.

With Dan Leavy moving from number eight to the blindside, Jack Conan comes in at the back of the scrum with Josh van der Flier continuing at openside.