Simon Zebo looking to thwart Ulster on their trip to Paris 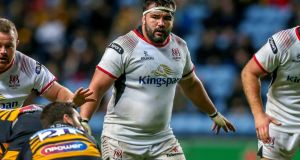 Simon Zebo returns to the fullback slot which his Racing coaches believe is his best as well as his favoured position for Saturday’s Pool Four clash with Ulster.

It is from fullback where Munster’s all-time record try-scorer has already scored six tries in five outings for his new Parisian employers and where he has built up a sharp on-field understanding with his kindred spirit Finn Russell.

The Scottish outhalf’s daring, offloading game has been dubbed the X facteur by the French media, with the ex-Munster fullback providing the facteur Z.

Zebo, who looks slimmer, revelling in his new life and on top of his game, has been steaming onto Russell’s offloads to demonstrate his finishing skills, and save for one home defeat to Lyon, Racing have been revelling in the enclosed, if slightly surreal, Defense Arena.

“Simon has made an immediate impression and for me he is one of the best players in the world,” said Dimitri Szarzewski this week.

“He’s a great person on and off the park. He smiles all the time, he has settled in well and we will be counting on him and Donnacha [Ryan]. They are experienced players. Donnacha gave us a lot of experience when he arrived last year and he made a big impression. He plays nearly every match for us and he is a very important player for Racing and Simon is doing that now.”

But although Ronan O’Gara, for one, believes Zebo’s remarkable strike rate would make him an addition to the Irish or Lions sides, there is little or no chance of Zebo being included in the Irish squad for the November Tests to be announced next Tuesday or Wednesday. Not even if Zebo scores a hat-trick, makes 20 tackles out of 20 and clears out 20 rucks.

The policy of only picking players based in Ireland with the provinces is fairly cast in stone, and may have in part contributed to Zebo’s good mate Conor Murray recently penning a three-year extension with the IRFU and Munster. But Zebo will perhaps be additionally motivated to show his ability on the Heineken Champions Cup stage against an Irish province.

The return of another world-class finisher in Juan Imhoff, a late cry-off last week, facilitates Zebo’s return to fullback, while Teddy Thomas is also back in a potent back three. Alas, Ryan is not playing, and has been replaced by Dominic Bird, while Bernard Le Roux comes in at openside.

As for Ulster, Marty Moore makes his first start after impressing off the bench last week, and Kieran Treadwell comes into the second row, but the influential John Cooney has been ruled out and replaced by David Shanahan, which in turn makes their bench look even more callow.

At least last week’s win over Leicester has eased the pressure on Ulster. They can afford to swing from the hip more readily and, in what could be an entertaining game, seem intent on doing so according to head coach Dan McFarland.

“We’re playing against a team that will be very different to Leicester in the way they play and the threats they have, but we’ll approach that with confidence. I know from playing against them in the Champions Cup that you can’t go to Paris and be shy in the way that you play, it’s just not possible. You’ve got to go there ambitious, you’ve got to look to take them on and play your game and see where it takes you. That’s what we’ll be doing.”

Racing will also bring a very strong set-piece game – they had a 100 per cent return on their scrums and lineouts in last week’s win away to the Scarlets – and a mix of ballast and offloading up front, epitomized by Mr Octopussy Leone Nakarawa.

“They also have threats on the ball across their front row, their front row is one I really admire – Eddy Ben Arous, [Camille] Chat and [Cedate] Gomes Sa – those guys are hard over the ball, so they have real threats in areas that a lot of teams don’t have threats. I know Leone [Nakarawa] extremely well, so these guys are guys we’ll have to negate to have a chance of winning.”