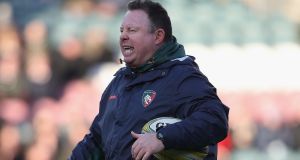 Leicester Tigers coach Matt O’Connor accused French referee Jerome Garces of failing to punish Munster and Conway for their lack of “a duty of care” to the Tongan fullback. Photograph: Matthew Lewis/Getty Images

Two serious accusations from Matt O’Connor. The Leicester Tigers coach believes Munster were allowed to play “cynical” rugby en route to their 33-10 victory. This is a misdemeanour up against O’Connor’s insinuation that Andrew Conway was responsible for Telusa Veainu’s broken jaw despite the Ireland winger concussing himself in the accidental collision on 45 minutes.

The former Leinster coach has also accused French referee Jerome Garces of failing to punish Munster and Conway for their lack of “a duty of care” to the Tongan fullback.

Conway knocked himself unconscious when clearly crouching into his attempted tackle on Veainu.

Everyone was subpoenaed. All available witnesses questioned. The verdict is promised during next Sunday’s juicy return leg at Welford Road.

“[Conway] smashed [Veainu] in his face with his head,” said O’Connor.

What exactly are you saying?

O’Connor has form with vague accusations so the daily print reporters followed the 46-year-old into the corridor under Thomond Park’s east stand. The Australian was clearly livid and recent history has taught us to expect incendiary quotes.

“Well, one guy’s got a broken jaw,” he continued. “That’s what I’m annoyed about. Surely there’s a duty of care? How’s it not a high tackle when he clashed heads and smashed him in his face with his head? We’re talking about seat-belt tackles, which are an absolute non-event. And a bloke’s got a broken jaw.”

The questions kept coming but O’Connor belatedly remembered to avoid a sanction from EPCR which could still be imminent.

Back inside the media room Johann van Graan was being baptised in European rugby’s December shenanigans.

Conway, who flopped awkwardly to ground after the clash, was lucid in the changing room.

“He’s okay,” said van Graan. “Obviously, he took a big knock, got a bit of blood all round, but he is fine.”

Unconscious on the pitch? “I’m not sure. I can’t comment on that. A good thing was he got up and walked off the field, which I’m pretty happy with. This game is a collision sport and I’m glad that both guys got up and walked off that field. I thought that’s the spirit of rugby, two teams going at each other for 80 minutes but at the end of the day, we are all people and the well-being of players is pretty important.”

O’Connor’s “duty of care” remarks are relayed to the Munster coach.

O’Connor’s accusation that Munster were “cynical, killing the ball at every opportunity” is also put to van Graan.

“The challenge is to adapt to the referee as quickly as possible,” the South African replied. “I thought the referee had a very good game. There is 50-50 decisions going both ways and no, we are happy with what we did out there.”

Munster captain Peter O’Mahony concurred: “You play the referee, you play your opposition, you play lots of different things. If we were penalised three or four times then we’d change. I thought Jerome had a fine game. We were at the end of a lot of penalties at the breakdown.

“That’s all I have to say on that really.”

O’Connor stated that Youngs’s neck roll on Chris Cloete and shoulder charge into CJ Stander’s head were the result of frustrations with Garces. The officials looked at both incidents before deeming warnings and penalties as sufficient punishment.

“We were second best, end of,” said Youngs. “We came up short and we got beat. I’m not going to get into a discussion about the referee.”

But his coach’s ire, or strategic grasping of headlines, should ensure that’s precisely what happens all week.

“Hopefully there is a reciprocal home game arrangement,” O’Connor added in reference to the refereeing. “There was a lot of stuff that went on that was pretty harsh. There was a blatant incident of killing the ball in the first half when we had momentum. That was probably a yellow card. We kick three and we’re still in the game.”

And, finally, what about Geordan Murphy’s imminent departure after 20 years at Leicester to become the Cardiff Blues head coach?

So, Murphy’s not leaving?