So much to admire in the rise of Exeter Chiefs 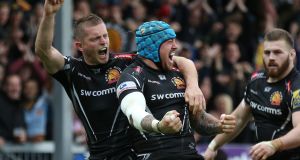 Strip bare the pageantry, the Tomahawk Chop chant, inflatable or foam replicas, drums, the Red Indian nomenclature that extends to the club’s name, the Exeter Chiefs and their second team, the Braves, because beneath the glitzy marketing gimmicks lies a deeply impressive rugby club.

At its epicentre are two men, owner Tony Rowe, a 68-year-old former Royal Marine, whose company South West Communications Group – it employs 150 people and has a turnover of £25 million – adorns the jerseys, and former player, head coach and now director of rugby, Rob Baxter.

Rowe, raised in a working class family in Portsmouth, wasn’t enamoured with school, so he didn’t go much.

There was only one catch, as he explained in an interview earlier this year with Anita Merritt. “It was only later on in life I realised I was dyslexic and it dawned on me that writing my own sick notes hadn’t been a good idea when I couldn’t spell very well.”

Leaving home at 15 to join the Marines as a bugle boy in 1964, he took voluntary redundancy and a £500 payment eight years later, retraining as a two-stroke marine engineer. He set up his first business repairing outboard engines, fostering a passion for power boat racing at which he became a national champion and also a member of the only all-English crew to win the Rouen 24-hour race.

He persuaded two friends to join him in taking advantage of the telecommunications industry in the 1980s setting up South West Telecommunications, renamed subsequently, and also has wide-ranging financial interests in a number of local businesses.

In 1998, having previously been a jersey sponsor for the princely sum of £4,000, he was invited to take over the running of Exeter Chiefs and has developed the rugby club from one with a turnover of £150,000 to £16.5 million last year, moving them from their old home, the County Ground to Sandy Park (2006), which he plans to develop further, starting next year, to boost the capacity to 20,000.

After a series of unsuccessful skirmishes with the playoffs, the Chiefs clambered from the Championship into the Aviva Premiership in 2010, upsetting Bristol in every sense. The anticipation was that the interlopers from Devon would be dispatched from whence they came, overawed and overmatched by the elite.

But the Chiefs had 20 points to spare above the relegation threshold, eighth of 12 teams and the following season, their second in the Premiership, finished fifth, one place outside the playoffs. If Rowe provided the business acumen off the pitch then Baxter supplied the rugby nous in guiding the club’s fortunes on it.

Alongside younger brother Richard, who played for 16 years at the club, the Baxter boys grew up on a 300 acre farm, sheep and cattle, where integrity of effort and dedication are cherished values that easily transfer to rugby. Rob, after 14 years as a player, 10 of them as captain, took over as head coach and in that first season guided the Chiefs to the Premiership.

He understood the importance of the relationship between the club and community – Exeter have at various points supported 18 local charities – but also had a remarkable knack of picking characters, some discarded by other clubs, who would add value to the playing culture.

Tom Hayes, a brother of Shannon, Munster, Ireland and Lions prop, John, was the Chiefs captain in the year they were promoted and their first in the Premiership. He was a hugely popular figure in his five years at the club before retiring with a back injury in 2013. Armagh-born Gareth Steenson, a 10-year veteran at the Chiefs who enjoyed a testimonial last summer, and fellow Ulsterman Ian Whitten are integral members of the current team.

Baxter’s ability to identify players who neatly fit the jigsaw of his playing patterns without spending big money is hugely impressive.

He persuaded Tomas Waldrom, Julian Salvi and Geoff Parling (he moved to Japan in the summer and will play Super rugby next year) to leave Leicester for Devon – reinvigorating careers that had stalled slightly.

He snapped up Olly Woodburn, a peripheral figure at Bath, the talented Ollie Devoto too from the same club, James Short from Saracens via London Irish and Mitch Lees from Championship side London Welsh, all the while enhancing the cultural and playing fabric of the club.

He joined the club in 2013 on a two-year contract and his development in some respects mirrors that of the club. He won a Currie Cup in South Africa with Western Province before moving to Devon and was capped by the England Saxons (2016) in recognition of his growing influence on the team. He’s the lineout fulcrum for the Chiefs’ lineout maul, amongst the best and most lethal in world rugby and a lucrative source of tries.

Exeter’s continuing development saw them reach the Aviva Premiership final in 2016 – they finished second in the league stages – before losing to European champions Saracens. But last season they beat Mark McCall’s side in a memorable semi-final at Sandy Park before claiming an extra-time victory over Wasps in the Premiership final at Twickenham; a remarkable journey from promotion to English champions in seven years.

Eight wins in 10 matches, eight points clear at the top of the Premiership, two victories in Europe, including inflicting a first home defeat in 14 months on Montpellier, suggests that there is no diminution in an appetite for success.

Rowe recalled that people smiled when he said several years ago that his ambition was to watch the Exeter Chiefs become champions of England and Europe. No one’s laughing now as he’s made half-good on that promise.

The Chiefs, a financially astute club, superbly run on and off the pitch, with a sense of community and a style of play that is both entertaining and effective; a totem for modern rugby underpinned by old school values. There is so much to admire.