McFarland knows Clermont will punish Ulster if they cough up possession 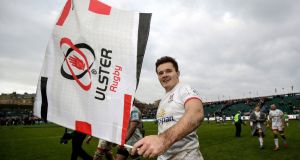 Ulster’s Jacob Stockdale celebrates after the victory over Bath at the Rec. photograph: Laszlo Geczo/Inpho

Ulster head coach Dan McFarland and his players are looking forward to a big Friday night in Belfast next week when they welcome Clermont Auvergne to Ravenhill.

A hard-earned 17-16 victory over Bath at the Recreation Ground offers the chance to take charge of Pool 3 of the Heineken Champions Cup.

“It’s a huge challenge,” said McFarland. “We all understand that. It will be a great occasion.

“Kingspan Ravenhill is a great place to play in against French teams. Our evening against Racing 92 last year was a special occasion. The players relish that – the fans relish that.”

One obvious concern ahead of the clash with Clermont is that Bath enjoyed two thirds of the possession.

“If we give Clermont that much ball they will torture us,” said McFarland. “Bath stuck it to us and were really physical. We had to match them set-piece wise and we did that. Defensively, we did a good job there, and we got two tries from turnover ball. That was really pleasing.

“Today was about team effort. Although we nearly beat ourselves at the end, we dogged it out. We had to work so hard in defence to stay in it. We had to have a better focus in the second half not to give away silly penalties.”

Bath director of rugby Stuart Hooper bemoaned the lack of accuracy that undermined his side’s efforts, saying: “We let ourselves down.”

But he refused to accept there had been any disruption caused by bringing back three of the England World Cup contingent: Sam Underhill, Jonathan Joseph and Ruaridh McConnochie.

“I wouldn’t put any of it down to that,” he added. “There were collective moments when we had to bring pressure to bear and we didn’t do that with accuracy.”

On Underhill’s performance, he said: “He put his body on the line out there for 80 minutes and he was really committed to doing a great job for us. I think he was outstanding.”

Hooper now prepares his squad to make the short trip to Harlequins next weekend to get Bath’s European show back on the road.

“You don’t have to win your home matches. You just have to get a certain amount of points, usually 19 or 20.

“Historically, it’s easier to do that at home but we’ve had Bath sides who’ve lost a couple of games and still gone through to the quarters. It’s about accumulating points. We’ve got one now and we go to Quins next weekend to get more.

“Whether it’s English, French or Irish opposition, we treat it as a European game.”