Racing 92 see off Clermont to set up Saracens semi-final 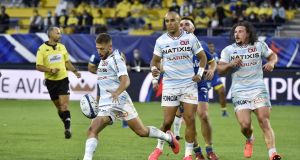 Racing 92 advanced to a Heineken Champions Cup semi-final against Saracens as they saw off Clermont Auvergne 36-27 at Stade Marcel-Michelin.

Louis Dupichot’s try in the third minute put the visitors ahead and Teddy Iribaren, having failed with his conversion attempt, then added the first two of six penalties he registered across the match.

After Etienne Falgoux crossed to get Clermont off the mark in the 25th minute, further Iribaren penalties and a converted Francois Trinh-Duc try then put Racing 24-8 up going into the break. The advantage was subsequently extended thanks to two more Iribaren penalties after the interval.

Clermont showed fight as Wesley Fofana and Kotaro Matsushima each produced tries, both converted by Camille Lopez, either side of a Maxime Machenaud penalty for Racing to leave the score at 33-22 in the 72nd minute.

Machenaud then scored another penalty with four minutes to go and Damian Penaud’s fine late try for the hosts was only a consolation.

Racing will now play Saracens, who beat Leinster 25-17 at the Aviva Stadium earlier on Saturday, in a week’s time at the Paris La Defense Arena.