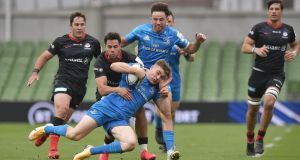 Like the rest of his teammates, Garry Ringrose has experienced the full gamut of sporting emotions in the last two weeks. Captain for the first time in leading Leinster to their retention of the Pro14 title a week ago, which he said was the biggest honour of his career, Ringrose described this quarter-final defeat by Saracens as heartbreaking.

This was also a reprise of their loss to the same opponents in last season’s final, after which Ringrose admitted he struggled for days afterwards to overcome his profound disappointment. A 25-game winning run since that day comes to a sudden end like this. Such is the nature of knockout rugby.

“It’s hard to articulate exactly. It’s heartbreaking as well, you know what I mean? Because I know the effort the lads put in, through lockdown and in the lead-up to this game.

“So, I’d never question that for one second. The effort and intent and desire and hunger, and all those words, that’s there. It’s just on the day, we were a couple of percentages off, and against a team like Saracens, they’ll take full advantage of that, like they did.

“Yeah, it’s a tough one to take but it’s not my first dark day in a Leinster jersey, so it’s how we react, how we learn and how we can hopefully make it better. That’s the challenge now. It’s not an easy one, because you’re going into the nitty gritty of why we were on the wrong side of the result, but it’s a challenge nonetheless. Nothing changes in that regard - we’re trying to get better and be better, so we learn from it.”

Johnny Sexton had been re-instated as captain for this game and had pulled the squad into a circle after the game. They go again, beginning with the start of the Pro14 in two weeks’ time after a weekend off none of them wanted.

“You look at the four stars that are on the Leinster jersey,” said Ringrose. “Obviously, it doesn’t fall on any one individual’s shoulders but Johnny has certainly played a big part in why there are four stars on that jersey. I wouldn’t question for one second the quality of his leadership, how he plays and how he talks, and how he brings other guys with him with the intensity and level that he’s at.”

“But, like I’ve said before, we’re all challenged to be the best leaders and lead ourselves the best we can. So whether that’s myself, Luke McGrath or Ross Byrne, when he comes on, James Ryan, the list goes on. Everyone is challenged to be a leader in the tough moments, especially out there. You saw it in the second half.

“Credit to Saracens - they obviously won - but in terms of our own performance, I think we were a different side that came out in the second half, and I think that was evident in how all the individuals that were playing carried themselves. So, I think Johnny is unquestionably the best leader in the group and the success we’ve enjoyed is as with him as a leader. It isn’t by accident. But, equally, we’re all challenged to be the best leaders we can be.”

Ringrose pinpointed the ill-discipline which cost them so heavily in the first-half especially, and was asked whether Saracens had provided a significant step up in intensity from the four derbies against Munster and Ulster.

“In terms of intensity, yeah I suppose there is. The level of intensity is high and what’s at stake is higher. As for the game itself, there was a lot of stoppages. It felt like whether it was our discipline, or moments in the game when we upped the tempo, it felt like there were stoppages as well.

“Yeah, those games where there is a lot at stake, there is a heightened sense of awareness and a heightened state of intensity. As a game itself, no it certainly wasn’t the most intense, in terms of running metres, as a back, although I know the forwards had work to do, in terms of the amount of scrums and mauls.”