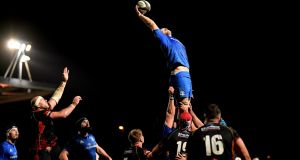 Leo Cullen made it abundantly clear, after Leinster’s gifted second-string destroyed Bernard Jackman’s Dragons 59-10 at Rodney Parade, that a familiar figure will be plotting their downfall at The Rec next Saturday.

“[Bath] have a coach in Girvan Dempsey who knows us very well which is always dangerous,” said Cullen.

“Girvan has worked very closely with us over a number of years and I’m sure he’ll have built himself up for this game. He’s so meticulous in his preparation, he’s been amazing in developing some of the younger guys you see out there today and the work he’s put in through the academy has been brilliant.

“We’ve definitely seen some familiar traits in their playing style so it should be a great match.”

Felipe Contepomi, Dempsey’s replacement as Leinster backs coach, will have other ideas.

The province’s phenomenal squad depth currently rises above any other rugby narrative. The Dragons, with their Welsh contingent returned, were clinically and repeatedly sliced open on Saturday evening.

Of those who featured for Ireland in November, only Ross Byrne and Andrew Porter reappeared as Leinster accumulated four bonus point wins from four games, three away from home, during the international window.

“Conor O’Brien gave us really good go-forward in the middle of the field and Ross Byrne controlled the game well with a couple of good kicks for Dave Kearney’s tries,” Cullen continued.

“This group has worked incredibly hard in this block. To get four wins sets us up well in the league and there’ll be some interesting selection discussions with a different focus next week against Bath.”

Number eight demands a prolonged debate as Max Deegan and Caelan Doris are both pushing hard to start. Same goes for Scott Fardy. The undisputed leader when Rhys Ruddock and Johnny Sexton are absent, Fardy’s recent heroics are similar to his exploits when the Wallabies reached the 2015 World Cup final.

Man of the match in Rodney Parade, he was even better against the Ospreys last week, the 34-year-old will probably drop to the bench as Devin Toner and James Ryan currently boast the highest standard of secondrow play in the world.

Ruddock and Josh van der Flier are also slated to return as the flankers aim to improve their Ireland selection prospects before the Six Nations.

Recuperation being a key tenet within this Irish system, the view that players need a provincial game before European action resumes no longer applies to Cullen’s Leinster.

Elsewhere, returning internationals in the Pro14 proved a case of needs-must with Rory Best and Jacob Stockdale coming off the bench to secure victory over Cardiff in Belfast while Peter O’Mahony and Keith Earls started Munster’s 44-14 thumping of Edinburgh in Cork on Friday.

Connacht, despite an impressive victory over the Cheetahs in South Africa that included a superb Tom Farrell try, are suffering the most from November demands with Kieran Marmion out for three months following ankle surgery while Bundee Aki has returned home to New Zealand to get married.