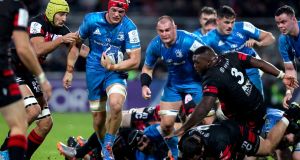 Leinster were relieved to leave Lyon with their winning record intact in the European Champions Cup after a nervous end to their win at the Stade Matmut de Gerland.

Just one try from number eight Max Deegan coloured a match in which the Leinster defence, more than go-forward back play, won the game against a hard-running home side that was just short on finishing power.

The boot of Johnny Sexton gave Leinster an early lead after withstanding the first flush of Lyon intensity in the opening minutes. Another penalty a few minutes later he was invited again but his penalty hit the post.

Lyon spent much of the opening quarter in the Leinster half but precious little got past the defence to threaten the line, the most promising Leinster move coming from Robbie Henshaw on 15 minutes.

It was both good and bad from Henshaw who saw space and made the break. But with James Lowe on his outside shoulder the Leinster centre stepped into contact and the moment was lost.

While Lyon dominated territory and possession Leinster remained patient. Their first chance arrived when Josh van der Flier blocked down outhalf Jonathan Wisniewski to feed James Ryan for a gallop up the park.

Van der Flier was up fast cleaning out inside the Lyon 22 as Leinster picked and drove. Five phases later Max Deegan, with considerable help from Rhys Ruddock, ran through hooker Mickael Ivaldi for a try against play with Sexton converting for 0-10.

It all seemed to come too easily for the former champions and even when Jordan Larmour was binned for diving in from an offside position, cynically according to English referee Luke Pearce, Lyon could not get on the scoreboard.

After almost five minutes of frantic tackling inside their 22 in the closing minutes of the first half, Leinster went into the break rightly proud of a defensive masterclass, with the home side having nothing to show for all their territory and possession.

Leinster also knew that both the lineout, where two were lost, and the scrum were coming under some pressure from an unrelentingly up-tempo home side.

Leinster could have extended their lead on 53 minutes when Ryan went soloing up the park. With three Leinster backs outside him, it was fullback Toby Arnold chasing back who got a hand to Ryan’s arm as he made the delivery.

A referral a few minutes later for a hit off the ball on Sexton by Fearns drew a chorus of booing, but neither side could gain the upper hand in a match that was becoming an arm wrestle of kicking and set pieces with little free-flowing rugby.

Just past the hour a huge turnover from Andrew Porter on Fearns as Lyon tried to maul their lineout drew enthusiastic back-slapping from Leinster, who were coming under pressure.

A penalty from captain Wisniewski on 67 minutes to close the gap to 3-10 laced the final 10 minutes with nervous Leinster energy. Sexton believed he had silenced the crowd on 75 minutes when he went under the posts, only for a referral to show Garry Ringrose had obstructed a potential tackler.

But an exchange of penalties in the closing minutes left Leinster 13-6 in front, the ball pinged far into the crowd as full-time closed the match. Lyon left frustrated, Leinster bouyant, knowing hard wins like this will shape their European campaign for the good.