Coach Andy Friend says the never-say-die attitude to grind out the win impressed, but the team can do better 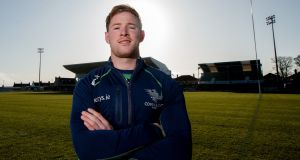 Connacht’s Kieran Marmion: “To know that he is going to be around for another three years is great news.” Photograph: James Crombie/Inpho

Things are changing at Connacht when after producing off one of their biggest wins in their European history the performance against Montpellier has been pulled apart.

“Not one of our better performances, to be honest,” says coach Andy Friend of Connacht’s stunning 23-20 Champions Cup victory over French heavyweights Montpellier at the Sportsground. “Defensively I would go so far as to say it was one of the worst defensive efforts for a period we have had all year. We just opened up space and let ourselves down.

“The pleasing thing is we addressed it as the game went on and got better, but we left opportunities behind. It was only when we sat down and looked at it how glaring they were. The good thing is they are fixable, and we own responsibility for both of those.”

Despite those execution failings Connacht’s display had all the hallmarks of previous successes on the European stage – most notably Toulouse in 2013 – though Sunday’s may well rate higher for heart and guts given the home side’s depleted resources.

“We have a great group of men here, and if we get knocked down we get back up; and we get back up stronger, and we did this week,” says Friend. “The never-say-die attitude to grind out the win was impressive, but we can do better and we know we are going to have to be better against Toulouse.

“It’s our accuracy of execution. We know our stuff, but do we do it all the time? No. Can we do it all the time? No, There is never going to be a perfect game, but we need to be better at knowing our stuff when it matters – whether it is taking that opportunity in attack or getting our spacing right and not opening opportunities for the opposition.

“If Toulouse have the football they will ask a lot of questions. They did in Gloucester, who held out for a period of time, but 200-plus tackles does takes a toll, and they [Toulouse] will be better again being at home with a couple of World Cup players back in front of a home crowd.”

Adding to Connacht’s injury woes from the win are fullback Darragh Leader (calf) and Cillian Gallagher (shoulder), but there is some amelioration in the list with six players integrated into training this week. They include Irish players prop Finlay Bealham and lock Quinn Roux, hooker Shane Delahunt, and backs Tom Farrell, Stephen Fitzgerald, and Matt Healy.

And with a short turnaround Friend says Connacht need to be smart with training and its intensity before heading to Toulouse on Friday. “When you have fresh bodies who are eager to play, with a six-day turnaround there is every chance some, if not all of them, will play.”

The 41 squad members have been routinely used as this season’s long block of games takes a toll, and Friend says last week’s late changes when captain Jarrad Butler, Matt Healy and Niyi Adeolokun were pulled were part and parcel of Connacht’s season.

“I was confident because I just know the individuals we have there, and my message to them was ‘guys, we have been together for 19 weeks this year, and seven of that has been training, this is our 10th game of rugby, so it’s not like we don’t know each other. Yes, we have changes, but that happens, so everyone knows what their role is, we have good athletes, so let’s go and run them around’, and that was the message going in, and they went and did that.”

Scrumhalf Kieran Marmion also remains sidelined with a back injury, but this week’s contract extension has eased fears of his departure from the Sportsground after missing out on the World Cup.

“A really important signing for us,” says Friend. “I remember applying for the job and watching Connacht games, and in the final you could see he was the lifeline of that team, such energy, everything he did was great, the way he tackled, he carried, his support play is just very, very good. So to know that he is going to be around for another three years is great news.”

However, Bundee Aki’s future remains unknown.“Again Bundee is aware we are keen to have him here, and bits of noise I’m getting is that he’s keen, but it’s a decision that rests with the IRFU.”