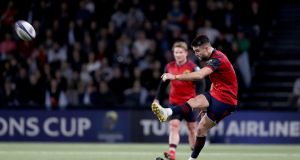 Munster, and perhaps Ireland, have a new weapon in their arsenal; Conor Murray as long-range goal-kicker. Given Murray is 28, and has been on the scene for eight seasons, playing over a century of games for his province and over half a century for his country, it’s not exactly an overnight discovery. But better late than never.

The 50-metre plus penalty that all too fleetingly edged Munster in front last Sunday in the 75th minute at the U Arena was his first three-pointer for Munster. Previously, there was a conversion in the 47-0 win over Zebre at Thomond Park in March 2016, and two late conversions in the 55-12 win away to Edinburgh in May 2014.

The only points he has kicked for Ireland were courtesy of a penalty against the All Blacks in Chicago, admittedly with the score 30-22, while Johnny Sexton was cramping.

But having just missed a long-range penalty at Welford Road in December, Murray attempted three penalties from around half-way against Racing. Hitting the post with the first, wide with the second and then confidently calling for the tee before landing the third, Murray comfortably had the distance with all of them.

Johann van Graan afterwards said it was something that Munster were looking to utilise more often, and it might even become part of Ireland’s weaponry. True, Rob Kearney has been a long-range option, albeit an under-used one, landing just one conversion in his 78 caps.

“To be honest, it’s something that stemmed from the 2013 Lions tour. Jenks [kicking coach, Neil Jenkins] just saw me, not messing, but taking a few kicks and he said I should keep it up. It’s something that I’ve tipped away at, not something I’ve practised an awful lot.”

“It’s in my locker, so it’s something that if called upon I am more than happy to have a go and hopefully help the team. It’s not something I’ve done more and more, it’s just recently opportunities have come up to do it.”

He also enjoys it, and always has done, reminding us that he kicked for St Munchin’s College in his schools days, and for Garryowen in the Ulster Bank League. But on graduating into the Munster senior set-up there was some bloke called O’Gara who was fairly handy off the tee.

“I put it on the back-burner and always had a little tip away at it,” said Murray this week. “I used to kick off the small Gilbert tee and now I use the telescopic tees. Tyler [Bleyendaal] actually gave me his one at the start of the year, I had a few goes off it and it felt a bit more comfortable with that. I’ve a similar technique to what I had when I kicked before, with a few little adjustments for longer range ones. If it keeps on cropping up I’ll probably have to practice a bit more.”

“The lineout callers have a meeting during the week and they come up with their plays. Billy [Holland] came up to me after it and asked me. I declined it first, but I got my head around it eventually.”

Another, less orthodox, addition to his game was the sight of him being part of the Munster lineout for a couple of attacking mauls against Leinster.

“The lineout callers have a meeting during the week and they come up with their plays. Billy [Holland] came up to me after it and asked me. I declined it first, but I got my head around it eventually.”

This is all part of some new attacking plays being introduced by van Graan and Felix Jones, such as Murray’s unexpected chip over the middle from outside the 22 for the chasing Andrew Conway.

Murray maintains that the challenge is to retain the same positive approach this week, albeit one that began on such a sad note in Limerick with the passing of Dolores O’Riordan, for the Cranberries and Munster have been icons of the city and the region.

“I love their music,” said Murray. “I was very used to hearing all of their songs. It is very sad isn’t it? It is very sad for the region of Limerick. It was a nice thing this morning, in our gym session, we have them playing for the hour and a half. It is a very sad thing to happen. She was quite young and it was too soon, but the legacy she and the others in the Cranberries left is incredible and everyone from Limerick and a lot further afield are very proud of them.”

Ever the drama kings, Munster had to take it to the last day of the last weekend, but experience of these scenarios has shown Murray that they are to be embraced.

“If you are bogged down by this kind of game or atmosphere coming up, then it is not for you. I think a load of lads are going to relish this week. It is a home European game at Thomond Park. Hopefully, it will be close to a sell out. We know our fans are going to show up for us.”

“It’s in our own hands. That is the carrot there for us. They are the games you want to play in. We probably never do it the easy way, but it is a massive week, it is a European week in Limerick and everyone loves these weeks. I love the buzz around it, I love training in these weeks. I love the hype and the build up. We are all in the same mindset. It is a good week to be around.”

Love tears them apart in stunning Epsom Oaks romp 16:33
Valterri Bottas pips Lewis Hamilton to pole in Austria 15:43
Chris Martin steals a point for resurgent Derby against Forest 15:23
Brighton see off doomed Norwich to edge closer to survival 15:09
Eamon O’Shea: We spent quite a bit of time talking about older people rather than to them 08:00
Crossword Get access to over 6,000 interactive crosswords