Prize of home quarter-final a major incentive for Leinster 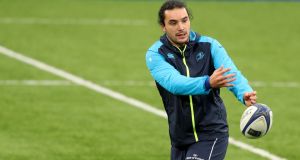 Rarely do the stars align so that complimentary reporting is rejected on all sides. Such is Leinster excellence under Stuart Lancaster’s coaching hand, and Leo Cullen’s overall guidance, a journalistic fear exists about turning into cheer leaders and, internally, the management are keen to avoid an avalanche of words trumpeting a return to the heady days of 2011 and 2012 (when actual stars were stitched below the harp).

The reasons are twofold: it’s January and not a single trophy has been gathered since the 2014 Pro12 title.

Also, a weakened Glasgow will come swinging into this Sunday lunchtime contest. No Finn Russell, Stuart Hogg, Zander Fagerson and Jonny Gray so nothing short of a bonus-point victory will be deemed a success.

It’s a vital return because the Pool can be won, and with it a home quarter-final, should Montpellier fail to hit the same chords against a well-stocked Exeter Chiefs at Sandy Park (3.15pm, Saturday).

With Rob Kearney and Cian Healy benched, only Isa Nacewa, Johnny Sexton and Fergus McFadden remain from the golden era peak – the starting XV at Twickenham in 2012 when the third European title was captured, this time at Ulster’s expense.

With this new era comes constant issue over the selection of three foreign recruits. Employment law decrees only two from three Australian or New Zealand passport holders can feature on European match days.

James Lowe and Scott Fardy are world class performers that simply have to feature as Jamison Gibson-Park – who qualifies s for Ireland before the 2019 World Cup – makes way for Nick McCarthy as scrumhalf cover to Luke McGrath.

“It is tricky,” Leinster coach Leo Cullen conceded before explaining the decision making process. “So, Jamison was signed first and then we signed Scott. When you are making the second signing, in terms of agreeing to sign guys, James was second and then Scott was third, so that’s the way it came about. We knew obviously when you’re making the second signing of non-EU players, that’s what they’re referred to, but we knew the situation with Scott and decided to go ahead.”

People now understand why Leinster made life complicated for themselves.

“It’s not ideal but we knew it as it unfolded and yeah, it’s just a dimension to selection that is a little bit different, but at some point Jamison becomes qualified after the three years, so that obviously changes the dynamic a small bit and James the year after.”

Sean O’Brien’s hip surgery keeps him off the field but a ready made solution – for Leinster and Ireland – arrives with the Josh van der Flier and Dan Leavy one-two punch.