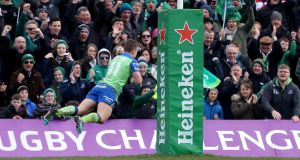 It is now a case of chin up for Connacht and their 8,000 supporters who had filled the Galway Sportsground on Saturday in expectation of claiming a path to Champions Cup rugby next season.

Gloucester, however, edged the spoils in Saturday’s eight-try quarter-final – not the first time Gloucester have prevailed. On all four previous European occasions – every one a thriller – Connacht have lost by a score.

This season Kieran Keane is the coach in charge, but he refuses to be downbeat about his “tight” group of players, who, having all but stymied their chances of Champions Cup next season, continue to play both sublime and ordinary rugby in equal measure.

“You can’t look at the doom and gloom of what will possibly become reality,” says Keane. “I think the team is in a good space, I think we have growing pains. We are learning, getting tighter as a group, and we have recruited really well.”

The bounce of a ball allowed David Humphreys’s Gloucester to open with the first of four tries within minutes, and thereafter Connacht were always chasing the game. They were level 10-10 with tries from Ireland’s two internationals, Kieran Marmion and Bundee Aki, but after going down 17-10 at half-time, they never looked like winning this game against a Gloucester outfit that played smarter, even with two sinbinnings.

Twice in the second half Connacht reduced the gap to two points, and two kick-and-chase tries from winger Niyi Adeolokun and Matt Healy – Marmion and Aki using the boot effectively for each – raised hopes with the score 28-30. However, a well organised Gloucester defence frustrated Connacht’s effort, and when Connacht’s Jarrad Butler was binned for a deliberate knock-on four minutes from time, replacement Billy Twelvetrees potted the simple penalty.

“I do believe we are a little bit naive as a team still,” says Keane. “We do have an issue about allowing teams to get into an area and get the ball – the second half is an example. They squeezed us looking for the penalty and the whole team knew it was going to happen, but we gave the penalty away at the scrum time, and that gave them points at that stage. Little things like that, we know what is going on, but unfortunately we slip up sometimes.”

Keane is keeping his own counsel why that happens, “I have my own opinions, but I don’t want to share them”, but concedes Connacht keep making life hard for themselves.

“We allowed them into the game a little too easily. Our defence wasn’t where it normally is, we weren’t that strong there, and we gave them a fair few points, which made life hard, but it put a smile on my face that we just kept coming back and coming back, and you know that is pleasing for me, it means I can do something. The character, the effort, the team work, the problem solving, all those things were just wonderful.”

Connacht must now head to Wales to face Ospreys, who have moved above Connacht into the play-off position in the Pro14’s Conference A.

It will be a test of how Connacht can recover.

“Yes, there are a lot of things that would need to go our way, and also we would not want to drop where we are, which is probably the biggest thing for me as a coach. Some of the stuff that went on in the game was quite magnificent, and some of it was a little bit off, so let’s add to the good bits, and if we can add more and more, then yes, we will be much better.”

Connacht have only reached the Challenge Cup quarter-finals on three occasions in 20 years, but expectations are now greater. While never having regained the highs of the Pro12 title two seasons ago, Keane, in his first season, says watch this space.

“Oh hang in there. Don’t be too disappointed if it doesn’t happen this season, it’s going to happen. Just stay the course.”

Replacements: D Heffernan for McCartney, U Dillane for Roux, and C Ronaldson for Carty (all 57m), C Carey for Bealham (61m), P McCabe for Buckley (67), E Masterson for McKeon (71),