Connacht run out of road against Gloucester 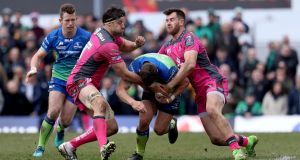 Connacht’s Tom Farrell is stopped in his tracks by Jeremy Thrush and Mark Atkinson of Gloucester. Photograph: Tommy Dickson/Inpho 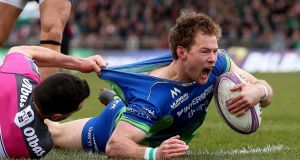 Heartbreak for Connacht, again. Nemesis Gloucester recorded a fifth win over Connacht, and once again dashed west of Ireland hopes of advancing in the European competition.

On all four previous meeting, only a score has separated the sides, and so it came to pass at the Galway Sportsground in this season’s meeting. The prize of a Challenge Cup semi-final, and with it a likely place in top tier of Europe, now looks remote for Kieran Keane’s men.

It was an error-strewn performance from Connacht, a mixed bag of super tries and poor execution, but ultimately David Humphreys’ side survived two yellow cards, took control and were deserving winners.

The visitors had held a 17-10 half time lead, courtesy of third try on 37 minutes that swung the contest in their favour. Although Connacht had held the advantage in the early stages, a host of unforced errors let Gloucester into the contest and they grew in confidence as the half progressed.

Kieran Keane’s men gifted the visitors a try after just three minutes, when an unfortunate bounce of a ball was gratefully gathered by hooker James Hanson who scored. It came via a contested lineout, and while Quinn Roux did well to dislodge the ball, it bounced kindly for Hanson who ploughed his way to the line. Welsh international Owen Williams’ attempted conversion bounced off the upright.

Connacht replied almost immediately, taking advantage of a penalty to touch. From a series of forward drives, Connacht quickly spread the ball wide and Ireland scrumhalf Kieran Marmion found a gap on his diagonal dash to touch down. Carty was wide with his conversion attempt.

The home side continued to enjoy the majority of possession, but momentum was punctuated by mistakes which put them under unnecessary pressure before a yellow card to Gloucester’s number eight Ben Morgan put Connacht on the front foot. Ultimately it led to a try from Bundee Aki after 19 minutes, Carty again missing the conversion.

Connacht then let their English opponents wrest control with a series of penalties, and from a scrum, Gloucester were given too much space out wide with left wing Tom Marshall crossing for a second unconverted try. Connacht then used up their get out of jail card when Gloucester were denied a try after TMO spied a forward pass from Mark Atkinson to Charlie Sharples. However, it did not dent Gloucester’s ambition and helped by three penalties, man of the match Henry Trinder skipped inside Roux to grab the third try.

Williams converted before tagging on a penalty soon after the restart to extend the lead to 10 points and Connacht had it all to do to rescue their Champions Cup hopes. Yet, as always, Connacht never gave up and put themselves right back in contention with a superb try, manifested from a scrum which had Gloucester back-pedalling. Muldoon released the ball at the right time, with Marmion chipping through, and Niyi Adeolokin did the rest, outstripping both fullback and left wing to gather and touch down, reducing the gap to five after Carty’s kick was wide.

Ramping up the pace, Connacht were back up to the try line, and although denied by a knock-on, Carty struck his first successful kick of the day to close the gap to 18-20.

It then took two superb touchline tackles from Tiernan O’Halloran to deny Gloucester, but eventually the premiership outfit made their possession count. Atkinson took control of a dithering attack, straightening the line to provide prop John Afoa with the gap to race in from the 22.

It gave them a 27-19 lead after 56 minutes, prompting Keane to bring on Craig Ronaldson for and an out-of-sorts Carty, Ultan Dillane for Roux, and Dave Heffernan for McCartney. But there was no let up with Williams tagging on another penalty before openside Lew Lidlow was sinbinned for a high tackle on Marmion in the 67th minute.

Connacht then gave themselves a huge shot in the arm with a 70th minute try. Aki kicked behind the defence and Matt Healy did well to gather and beat both Woodward and Sharples to touch down under the posts. Ronaldson added the conversion to bring Connacht within two points heading into the final 10 minutes. However they never made it again into their opponents 22, Gloucester sealing the deal with a 77th minute penalty.