Rugby needs to do more to develop its players as people 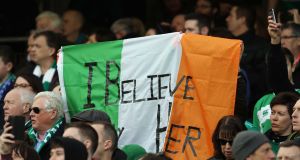 Every so often, in this publication and elsewhere, women speak of the ongoing menace and aggression they encounter from groups of young men at night time in Irish cities: the cat-calling, the taunts, the provocations, the insults, the sense of being reduced to sexual prospects.

It’s maybe not criminal behaviour but deeply unpleasant and intimidating and, it would seem, a common experience.

The accounts of naked hostility are often disturbing and lead to an automatic question; what fires men who roam in packs to behave towards women they don’t know in that way. They would never dream of treating their own mothers or sisters or the women who feature in their lives as people in such a fashion. And then: who are they? Could they be one of ours?

The rules of engagement have always been different for male sports stars. For decades, society has decreed that athletic excellence and its accompanying perks – stardom and wealth – guaranteed admiration and adoration in abundance; they become the mortal gods.

Sport is full of tales of its male stars treating the women in their lives as props, almost, in their own mythology.

Everyone knows the yarns: the voracious ‘Basketball legend Wilt Chamberlain, who scored 100 points in a single game and boasted of bedding more than 20,000 women was found dead in his Bel Air, Cal home yesterday’ NY Post Oct 13 1999). The the playboys (“Where did it all go wrong, George [Best]”), the reckless (‘Magic’s Aids Virus Stuns The Nation’ NY Daily News 1991), the many episodes of violence, the endless parade of trysts and scandals.

Muhammad Ali was probably the most beloved sports figure of the 20th century and so the mythology glosses over the fact that, as biographer Jonathan Eig recently pointed out, (in an interview with the42.ie) as well as being an extraordinary fighter, a luminous personality and a vivid civil rights figure he was, in his prime “a terrible husband, not a good father and he treated women horribly”.

Scroll any list of the greatest ever sports film and Raging Bull invariably comes in close to the top. It’s not the scenes where Robert De Niro’s Jake La Motta roughs up his wife Vickie (Kathy Moriarty) that people remember though: it’s the violent beauty of the Intermezzo boxing scenes and that bit where DeNiro does Brando doing Terry Molloy and how tragic it all is.

In the long, rich, complex tradition of sports dominated by male participants and male voices, women have been expected to be content to hold a sorry and submissive role or, at best, add a dash of sex appeal and glamour to the main show.

After the splendour of Ireland’s Grand Slam season in the Six Nations rugby tournament, the IRFU and Ulster rugby now find themselves engaged in one of the most difficult and delicate reviews imaginable. Following the verdict this week in ‘the Belfast rape trial’, the unions must decide how to proceed, with two of their players under contract found not guilty of rape in a case has become an emotive intersection of male attitudes towards women and sexual conduct.

Given the intense public response to the case, whatever decision they reach is going to draw fervent criticism. The intense public interest and blanket coverage of the nine-week trial gave a glimpse behind the curtains of the private lives of the rugby players on trial.

One of the conclusions drawn from the case was that it reflected the deep-rooted culture of misogyny within rugby in general. The most scrutinised aspect of the case revolves around the series of Whatsapp messages exchanged by the men on the morning after the alleged rape took place in which they congratulated one another and referred to their engagement with the complainant in language that has caused general offence and outrage.

There are two ways of regarding these messages. Either they represent a horrible aberration from the way the men in such circles communicate. Or those words and sentiment are, however bleak this may be to think about, indicative of the kind of language and thinking that at least some young men use to talk about sex and women – at least in group forums.

‘Courage’ and ‘bravery’ are two of the most frequently used words in the testosterone-loaded vernacular of rugby commentary. If courage is ultimately defined as grace under pressure, then it was clear to anyone following the trial that the complainant in the rape case had limitless reserves of it. There were days, during that long and relentlessly grim trial, when the young woman seemed like a lone voice facing down an entire institution; the best legal counsel; the aura of elite rugby; the resentment of placing two esteemed sports stars in this position.

The prolonged cross-examinations she endured revealed the old societal expectations as to how a woman should behave on a night out – how she should drink or touch or move and what those gestures might imply: criteria that do not apply to men.

While the verdict, although unsurprising, bitterly disappointed many people and prompted rallies of support around the country, the woman’s testimony and eloquence have already had a profound impact on making Irish society think about how its young men treat women.

It is probable that right now, this very Saturday night, some men, somewhere, will think a little more carefully about their behaviour in the usual haze of alcohol and opportunity – real or imagined. It has already had the effect of prompting one of the men acquitted to publicly acknowledge the hurt of the complainant.

The people ultimately most damaged by those messages were their authors. Hearing them read aloud and scrutinised in a court of law can’t have been a proud moment for them and will become more shameful as time moves on. They just sounded pathetically boastful and needy; boys trying to convince one another that they were, in that obligatory male sports tradition, studs.

But it’s just naive to believe that similar texts with similar language haven’t been shared by other groups of young men in the years since the events of the night which led to this trial. Maybe the next step is addressing why some men feel the need – or wish to – to communicate like that.

In the days after the Grand Slam, much praise was lavished on Irish rugby for its emphasis on the welfare and development of its players. The system ensures that their bodies get the rest and care required and, as everyone knows, their mental application on the field has been exceptional. But in light of these events, isn’t it time for the IRFU to place further emphasis on the development of its players as people?

The best and most promising players move into the IRFU system at an impressionable age. They come under the influence of many brilliant role models, with Joe Schmidt the most obvious example. That is the time to make them understand the responsibility that comes with the exalted status of being a ‘rugby star’.

That’s the time to make them mindful of the opportunity they have as ‘legends’ to influence the mimicry of the adolescent males who revere them; that how they carry themselves, that what they say in private, that how they speak about women, will influence those coming up behind them.

And then, just maybe, the strongest minded will have the courage to think about who they want to be and what they stand for as they try to become men.