Secondrow says partnership with Tadhg Beirne is flourishing ahead of showdown 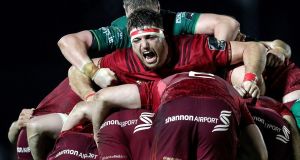 Munster’s Jean Kleyn will becomes eligible for Ireland under the residency ruling at the start of next season. Photograph: Laszlo Geczo

The gale force wind may have been a factor in the 10-all arm wrestle in round one, but the Munster lock Jean Kleyn believes it will be a foretaste of what is to come when they lock horns with Exeter again.

As Leinster discovered in two decidedly heard-earned wins over the Premiership leaders last season, pain comes with the territory.

“The game at Sandy Park was 80 minutes of hell and I expect this weekend to be the very same,” said Kleyn.

On reflection, he did draw back a tad, but this was merely dealing in semantics.

“Yeah, hell is a strong word, but it is going to be tough man. It was real tough over in Sandy Park with the conditions, which probably didn’t help. The first half we were playing against a really strong head wind so there were a lot of one-metre carries, a lot of really hard tackles and stuff.”

“They have a really strong pack but they carry hard and they defend hard as well. So it is going to be hard on the bodies and I expect a lot of boys will be coming in bruised on Monday morning.”

The return of Jack Nowell has added to Exeter’s attacking game, and the performance against Castres underlined that there’s more to them than their unrelenting and trademark pick-and-jams when within a sniff of the opposition line.

“They are an exceptional attacking set up,” according to Kleyn. “We know this from their Premiership stats. They are the highest try scoring team and defensively they have conceded the least amount of tries. They are a very good side on both sides, attack and defence.”

“Their set piece is strong, their kicking game is good. They are a very well rounded side, with a lot of threat and we are going to have to be at our best if we are going to take them to task on it.”

The big games have been coming thick and fast, and there’s been none bigger than this Heineken Champions Cup Pool 2 decider, which will define much of Munster’s season.

“I say that but then last weekend was the biggest game of the season and the weekend before that was the biggest, so we are at a point in the competition where nobody can let anything slip, just because of the points margins as well,” said Kleyn.

Kleyn, who becomes eligible for Ireland under the residency ruling at the start of next season and thus in time for the World Cup, put in another good shift, and his secondrow partnership with Tadhg Beirne is beginning to flourish.

“Tadhg is an exceptional player. He really has stepped into the lineout calling role exceptionally well too. I think it is just about our entire pack working together around the line out and knowing their detail. That makes Tadhg’s job all the easier when he is calling, when everyone knows their ‘cues’ and is ready to go. He is an exceptional player and he is very dangerous on attack, he runs some dangerous lines. So it is good playing with him.”

It’s still worth reminding ourselves that Johann van Graan is only in situ barely a year as head coach, and with the benefit of his first pre-season, Kleyn says his van Graan has implemented new policies and on field structures “that are working quite well at the moment.”

“I think he has a little bit more of a free rein this year because he was able to start on a pre season, get his entire run. It has been good. We have also had the addition of a few new players which has also added to the squad depth.”