Graham Rowntree delighted with how Munster’s young guns have integrated 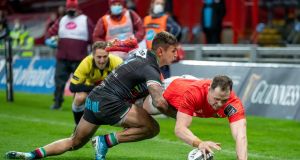 Munster have welcomed back their nine-strong international contingent who had varying workloads in the Autumn Nations Cup and now face some difficult selections given the rest of the squad have won seven games out of seven in their absence.

“They’re used to it, they’ve done it before,” said forwards coach Graham Rowntree of the nine returning Irish players. “We were able to give them some video clips of what we’ve been doing since they’ve been away and we’ve got them up to speed pretty quickly.

“They’ve trained well and we’ve just come off the back of a pretty tasty forwards units session and the lads have slipped back in nicely. They’re diligent people and nowadays we can put stuff online so they finish the Irish camp and then focus on what we’re trying to do.”

That said, the Munster coaching ticket would have no qualms about selecting some of the younger players who have come through in the last two months.

“We wouldn’t pick them if they weren’t comfortable. The art to coaching and selection is bringing them in at the right time and with the right combinations. Johann [van Graan], in particular, is very good at that – picking experienced guys around them – and it has worked.

“Fans are enjoying it because they’re used to it. Think of the Munster legends who have gone before them who all started in the academy. Now we want to produce and promote that homegrown talent because it’s the bedrock of the club.

“This is a chance where they’ve got to get on with it. We’ve got every confidence in them and can’t wait to see them play.”

“He has took his chances, he’s played well, and to get injured the way he did over the tryline, that’s sad for Matt. It’s another unlucky player who was in some real form. He’s a good lad as well, he has really fitted in here, such a good lad to coach. He’s a real giver, he helps to coach the lads on the field and he will be a real loss. Hope he gets better real quickly.”

Against that Fineen Wycherley has recovered from a groin injury.

The Harlequins centre Andre Esterhuizen has been handed a four-week ban for striking with his elbow during last weekend’s Premiership game at Gloucester, for which he was red carded in the 45th minute. Despite that Harlequins won 34-24.

Chelsea condemn Liverpool to latest defeat; Gordon Elliott hearing to begin 07:37
Walk tall, golfers, and tell Leo that golf is not the enemy at the gate 06:35
Mick’s millennium: McCarthy clocks up his 1,000th game as manager 06:00
The interpros give players a chance to prove the coaches wrong 07:09
Pro14: Munster-Connacht rivalry set to take on a sharper edge 06:00
Crossword Get access to over 6,000 interactive crosswords