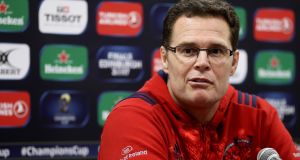 Munster Director of Rugby Rassie Erasmus speaks to the media after his side beat Toulouse to reach the last four of the Champions Cup. Photo: Tommy Dickson/Inpho

Rassie Erasmus has expressed the prevailing view in the Munster set-up that his preference would be for Saracens to beat Glasgow simply because it would mean hosting the English team in the semi-finals rather than travel to Murrayfield. But above all else, he and Munster are just glad to be back in the last four for the first time in three seasons.

“It would always be better to play in Ireland, we’ll be hoping for that. If not, we’ll have to go and play in Scotland,” he said.

Reflecting on their 41-16 win over Toulouse, which was garnished with a flurry of 17 points in the last five minutes, Erasmus said: “It was a tough game. The floodgates opened in the last 10 minutes and the scoreline is flattering but we’re delighted to be in semi-finals again.”

“They were a threat for the entire game, little chips behind and hard yards up front. But credit to the lads who made the hits. It was a brilliant defensive effort. The set-piece is their bread and butter, they picked a 6/2 split on their bench and that was a statement. We knew they’d back their scrum and maul, but we held it well without having dominance.”

The absence of Conor Murray was compounded by the loss, during the game, of Peter O’Mahony (thigh), CJ Stander (ankle) and Keith Earls (back), but Erasmus was relatively confident all should be fit for the semi-finals three weeks hence, whatever about Munster’s intervening Pro12 games away to Glasgow and at home to Ulster.

Of Murray, Erasmus said: “Three weeks ago he almost played for Ireland. It’s a waiting game, a matter of him getting more power into his arm. We thought until Friday’s Captain’s Run he’d make it. But he’s not 34, it’s not his last game, so we thought it was the sensible decision and hopefully he’ll be back soon.”

“Keith I don’t think it’s serious. It’s back pain. CJ hurt his ankle, Peter was a massive blow to his upper thigh. A dead leg, a massive dead leg.”

“The tough thing for us is to manage the squad. We have to manage the games, we’re in a semi-final and the upcoming (Pro12 games) we’ll have to rest players here and there. We’ll keep Europe in the back of our heads. Hopefully those guys will be available, I’m not sure.”

O’Mahony said of his injury: “Yea, it’s not too bad. I just got it compressed now so hopefully it’s not anything too serious. I just got a bang on it and it swelled up quite badly at the time, so I just struggled to run it off. I tried to run it off but my bend went, so I unfortunately I couldn’t stay on.”

Man of the Match John Ryan said the squad always had confidence in their ability to reach the last four.

“It’s something we’ve worked on, we believed we’d get there. Not many people, but we backed ourselves to do well. We’re anxiously waiting for tomorrow’s games. We’re well used to Glasgow, but I wouldn’t say no to either.”

1 Saracens to accept second 35-point deduction and effective relegation
2 Welcome to Iten in Kenya – home of champions and cheats
3 How do Klopp’s Liverpool measure up against greats of past?
4 Shane Lowry’s Abu Dhabi defence crumbles in the sand
5 TJ Reid reveals the fresh secrets of his consistency
Real news has value SUBSCRIBE