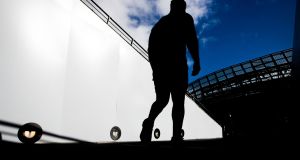 Leinster’s captain’s run at the Aviva Stadium ahead of their quarter-final clash with Wasps. Photograph: James Crombie/Inpho

Make-or-break weekend in the European Champions Cup, and it’s good to be back. Last season marked the first time since the 1997-98 campaign when no Irish team reached the knockout stages of the premier European competition. Maybe it’s true that you don’t miss something until it’s gone. But Saturday sees Leinster and Munster host two high-calibre quarter-finals in quick succession.

Soon after, at 5.45, the Thomond Park bearpit will again be heaving to capacity as two-time winners Munster host the tournament’s most successful side of all, four-time champions Toulouse in a reprise of the last time both these Euro titans reached the knockout stages three seasons ago. One ventures that Europe is happy to have the Irish back as well.

In Isa Nacewa’s initial five-year stay with Leinster, he was part of three Heineken Cup wins and a losing semi-final, and even in the sole pool exit of 2012-13, there was the compensation of a European Challenge Cup quarter-final, which Leinster won 48-28 away to Wasps en route to a double-winning finale to the season.

On returning last season, it was therefore the first time he was on the outside looking in on quarter-final weekend. “Not nice having a weekend off, especially at this end of the season,” he said on Friday. “You envy the guys that are out there playing. I couldn’t bring myself to watch the games because you just want to be involved in them. Yeah, tough times last year but the flip side of that is it’s positive to be back here involved in a special week I don’t take for granted, that is for sure. I’m really looking forward to it.”

With over 49,000 tickets sold as of Friday, there should be tries in Dublin, even if the forecast is for rain. Leinster lead the way in the Pro12 and also did so in the European Cup pool stages, despite having Montpellier, Castres and Northampton, and their tally of 110 tries in 24 competitive games is already 50 more than the 60 they scored last season in 30 matches. Wasps lead the way in the Premiership with 101 tries in 24 games.

There should be a fair whiff of cordite in the Aviva air too. Wasps welcome back captain and Lion-in-waiting Joe Launchbury, Nathan Hughes and Elliot Daly, all of whom were in the England team denied back-to-back Grand Slams at the same ground a fortnight ago. They’ve also rotated their frontrow, with Marty Moore reverting to their bench, in a star-studded team featuring their three playmakers – Danny Cipriani, Jimmy Gopperth and Kurtley Beale – as well as the finishing skills of Christian Wade and Springbok Willie le Roux.

For their part, a more home-grown Leinster recall Garry Ringrose, Robbie Henshaw, Johnny Sexton, Jack McGrath, Tadhg Furlong, Devin Toner and Seán O’Brien – all of whom were on duty for Ireland that day – as well as Jack Conan, in the continuing absence of experienced duo Rob Kearney and the hugely influential Jamie Heaslip.

The Leinster team retains only five of the starting XV which suffered a record 33-6 home defeat in the competition to Wasps last season, and then lost away 51-10, which shows how much they’ve changed since. But that double-whammy makes this a revenge mission as well.

Toulouse will be seeking redress for the 47-23 drubbing they received at this juncture in Limerick three seasons ago. The misfiring French team, who suffered a fifth defeat in six games last week away to Bordeaux, recall left-winger Paul Perez, Cyril Baille, Richie Gray and captain Thierry Dusautoir, who missed that game three seasons ago through injury.

Munster, who have won seven of their previous eight home quarter-finals, have been buoyed by the news that Conor Murray has been named in the starting team, with Simon Zebo, Keith Earls, Donnacha Ryan and CJ Stander also back in harness after Ireland duty.

In keeping with a Six Nations that has only seen England win away outside of Rome in the last two years, so in the past three seasons all but two of the dozen quarter-finals have been won by the host team, with only one club, Saracens, bucking the trend.

Away wins are increasingly hard to come by even in the Champions Cup pool stages, which this season continued to drop to 13 from 54 matches, excluding games involving Italian teams, a success rate of 22 per cent. History shows that one in every four quarter-finals ends in away wins, 24 per cent or 19 of 80 to be precise.

The prize for Munster is more than likely a semi-final against the holders Saracens in the Aviva Stadium, or alternatively Glasgow in Murrayfield, three weeks hence.

The prize for Leinster is an away semi-final in France, with Clermont in Lyon the likelier destination than Toulon in Nice given Clermont have averaged 45 points per game in their three home pool wins and beat the ageing and fading three-in-a-row champions 30-6 in the Top 14 last January. Toulon, as ever, are liberally dispersed with high-achieving galacticos, but are still without Matt Giteau.

Wayne Barnes is in charge of this all-French affair, which is the weekend’s final quarter-final and kick-off 4.15 local time/3.15 Irish time. So the semi-final line-up should be completed bySunday evening.