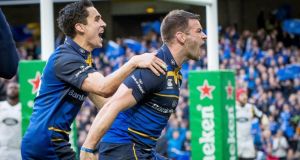 Two contrasting images. One instantly forgettable, one will last forever.

After the game Johnny Sexton let his son, Luca, wander about on the grass. Giants everywhere, Jack McGrath strolled past to scoop a fellow St Mary’s boy onto his massive shoulders.

At half-time a pint hunting Leinster supporter stalled in the upper echelons of the Aviva’s west stand to needlessly inquire of the Wasps analysis team: “Is this all the English Premiership has to offer?”

At this moment Dai Young’s “rabbits in head lights” (the coach’s words) were trailing 22-3 as the good times seeped back into Irish rugby. And with it comes that lofty, unnecessary arrogance.

Some people couldn’t help themselves as this 50,266 crowd were treated to the aligning of present and future stars: Johnny Sexton and Joey Carbery creating scores and being targeted in almost equal measure.

The game had so many fascinating moments but Sexton allowing Carbery showcase his superior range of passing at first receiver might prove seismic.

The Leinster offence soared as a result. Carbery may even prolong Sexton’s career. His delicate handling created tries for Isa Nacewa and Jack Conan but Sexton added all the extras while sending Robbie Henshaw over for try number three on the stroke of half-time.

But the game’s most thrilling moments belong to the new breed. Wasps had sneaked back into view thanks to a bullish try from Jimmy Gopperth, Sexton’s replacement during those dark Parisian years, to follow up a searing individual score by Christian Wade. That made it 25-17 with 15 minutes remaining. The mighty Tadhg Furlong had just made way (in stark contrast, Marty Moore had the briefest cameo for Wasps before requiring a Head Injury Assessment he seemingly did not pass).

A sliver of worry evaporated when the largely anonymous Elliot Daly was forced to kick from deep in his 22. Carbery gathered and attacked, as he had done all afternoon, almost skinning Kurtley Beale. The ball found Garry Ringrose who eased inside Daly before ghosting past Gopperth. A sensational try was denied by Beale dragging Ringrose down seven metres short of the try line.

The stadium came alive as Sean O’Brien and Jack Conan bashed away before an error allowed Wasps to clear off their rickety scrum. The reprieve was temporary. Gopperth hoisted a garryowen which Ringrose took over Daly’s head. Leinster ploughed down field with Dev Toner – who rattled Joe Launchbury out of touch – held a yard short before Fergus McFadden reappeared from the wilderness to claim the fourth try of this utterly comprehensive victory.

“Definitely,” replied Leo Cullen when asked if the academy graduates are more professional than his generation. “They do apply themselves particularly well. As far as I can see anyway. Not sure what they do when they are out at night!”

Wasps did have chances to alter the course of this contest. Especially Willie Le Roux. The Springbok fullback latched onto Beale’s wonderful break on 23 minutes only to lose control of the ball while swan-diving over for what seemed a certain try.

Sexton was on hand to convince Nigel Owens to check the big screen.

“I don’t think any coach is going to sit here and crucify his own players,” said Young. “He apologised to the coaches and the players at half-time. What more is there to say? I’m not saying it was a turning factor; we had 55 minutes to turn it around.”

But it did matter because Leinster responded with a flurry of blows with the ravenous attacking appetite of Carbery, and Sexton, yielding the tries that made it all but impossible for Wasps to find a way back into the contest.

Not against these young Leinster players. Sean O’Brien put in an enormous shift until hurt and replaced by Josh van der Flier. The bloodied Dan Leavy (12 heavy tackles) and Henshaw (19 brutal carries) were outstanding in equal measure but Carbery’s statistics tell no lies: 25 carries for 200 metres is astonishing for a fullback, never mind an outhalf masquerading at 15.

Of course, Carbery can play anywhere. He was a teenage scrumhalf.

The Cullen and Stuart Lancaster pow-wow about what to do when Jamie Heaslip and Rob Kearney regain fitness would sell 50,266 tickets all by itself because Conan and Carbery are currently undroppable.

Conan is a superior ball carrier – just ask the woeful Danny Cipriani – while Carbery does the one thing Kearney has never done from fullback; he gives Leinster what every successful modern team requires, a second play maker.

Carbery can be cursed by his own ability. He was more responsible than anyone for Wade’s fantastic try on 52 minutes. Caught while trying his umpteenth counter attack, the Wasps pack trampled over him and quick hands by Ashley Johnson set the English sprinter free.

That costly moment aside, Nacewa kept Wade in check but it does provide a weakness that Clermont/Toulon in Lyon/Nice would ruthlessly expose.

But that’s knit-picking of a truly excellent Leinster revival under the Cullen-Lancaster ticket. Or is that the Sexton-Carbery ticket?

The biggest compliment that can be paid to Carbery came when Johnson torpedoed into him, after the whistle and without the ball, not long after Kearnan Myall attempted to splinter Sexton’s breast plate.

“He is definitely somebody who is being targeted,” said Cullen. “I went back through the Ireland v England game. Itoje you saw. Haskell you saw. Teams are willing to go after him. It’s definitely something referees need to keep in mind because it is easy for a defender to commit to a tackle knowing that he is committed but knows he is not going to tackle the man before he gets the pass away. It is one of those grey areas but Johnny is definitely a recipient of that.

“But having a second receiver [Carbery] takes away a little of that pressure [on Sexton].”